Once the Crew has voted on the Tall Tale and listened to the Madame Olive, they are given the Tale Book, which they can find and take out in the Map Radial menu. Any Tale Book can be viewed with the Primary Use button (Left Mouse Button/Right Trigger). Once taking a closer look at the Tale Book, it's pages can be turned with the Q and E keys on a Keyboard and the Left and Right buttons on a Controller.

Pages 1-14 of the Tall Tale book are always the same:

Start off by talking to Madame Olive at Sanctuary Outpost. The Entrancing Madame will enlist your help in tracking down her best friend Rose who fell in love a handsome pirate named George but both have gone missing. Luckily Olive is in possession of Rose's diary and hopes you can track down some of the keepsakes that Rose wrote about. With those items, Olive thinks she can fashion a compass that would track down Rose and George.

The diary contains a large amount of exposition that details the couple's romantic exploits. Rose listed the location of the buried Chest of Memories that holds two Lovers Notes. The Notes, in turn, will lead you to the keepsakes that Olive requires.

If you are seeking all of the commendations, you will need to grab The Lovers' Notes. All of the locations that you could visit on this quest are scattered all over the Sea Of Thieves as are the journals. You may or may not visit a place where (or near) a journal is located. Journal locations will be called out in puzzle locations below so you can grab them while you are there but be sure to visit the The Lovers' Notes section at the bottom of the walkthrough to collect those that you missed before ending the quest.

Did Olivia send you? Oh, thank heavens!
I've been beside myself, out here all alone with no-one to confide in but that beastly Humphrey.
There's nothing I can do, you see, not really.
I'm no pirate, not like my best friend Rose. She's amazing!
I once saw her bite a rope clean in half, you know.
She's so fierce! Unless she's with George...
He's her fiance now, and she sent me this beautiful diary! All about how they both met and fell in love.
They've even asked me to officiate their wedding! It's such an honor.
Except... You see...
They were due to be married three days ago, but they never arrived and I've been worried sick ever since.
I just know something must be wrong.
Olivia told me her compass helped you locate a Skeleton Lord.
I'm not as skilled with the Ritual, but... Yes, perhaps the same magic might help locate Rose and George!
Rose wrote about burying precious keepsakes in her diary.
Find their Chest of Memories and bring me any memories it leads you to!
Please, hurry, I'm begging you!

Your first task will be to collect the Chest of Memories. Page 15 of the Tall Tale book will tell you where it is located. You can also click on the name of the island that is mentioned in the story below to find the exact location.

Once you have obtained the Chest of Memories you will find some more pages for your Tall Tale book. The pages will lead you to the next task in your quest which is to find two more items; the George's Spice Box and Rose's Music Box. You can use these pages along with the information in the first 16 pages of your book to determine their location. Or, you can click on the name of the story below to see the exact location.

Tip: You will be picking up two items in this next part of the quest so you might want to bring the chest along for easy portability. This will also make it easier if you happen to find yourself in some unfortunate circumstance that has you abandoning ship and swimming for life to an island hoping against hope to find a rowboat. Not that such a circumstance would ever befall a pirate like yourself but one can never be too careful.

Submit these items to Madame Olive for her to trans-mutate.

Don't forget to grab the Lover's Compass from the table before you leave.

That looks like the music box Rose spoke of...
And these must be George's secret cooking spices!
I'm not as skilled at the Rite as Madame Olivia, but Rose is counting on me, so this has to work.
I'll make it work!

(Madame Olive adds the mementos and some ingredients into a transmutation box, which processes them into an Enchanted Compass.)

There...
This compass will lead the way towards Wild Rose and George.
Wherever they may be.
Please, do whatever it take to get them home safely... So they can finally have their wedding day!

In Search of the Lovers[edit | edit source] 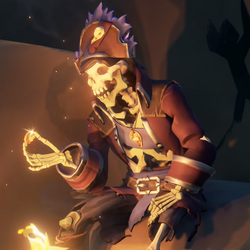 You will next discover the tragic fate of Rose and George. Unfortunately for the two, George had a way of attracting the wrong kind of women. In this case, a Skeleton Captain named Rooke who was the kind of woman to murder you and your would be wife on your wedding day.

Fortunately, the two love birds had special pendants to which they were spiritually bound.

Follow the Lover's Compass to Rose. Grab Rose's Pendant and one last love letter, then follow the compass to George (rather, his pendant). After a brief battle with the forlorn Skeleton Captain, you will be able to claim George's Pendant. Current known locations for either Rose or George are Cannon Cove, Crescent Isle, Lone Cove, Mermaid’s Hideaway, Plunder Valley, Sailor’s Bounty, Smuggler’s Bay, Snake Island, Shark Bait Cove, and Wanderer’s Refuge.

Note: If you visit Cannon Cove or Lone Cove during this part, you might want to pick up The Lovers' Notes #2 or #3

My little Georgie. Finally, I have you to myself.
You could be a little nicer to me, given everything I've sacrificed.
Time...
Money...
Skin.
Graymarrow doesn't give away secrets easily, you know.
Still... it was worth it.
Binding that silly girl's spirit and watching the light fade from her eyes.
I wish you could've been there, Georgie.
I was magnificent.
Oh now don't sulk.
You'll see things my way in time.
After all..
I'm all you've got left.

Submit the pendants to Madame Olive to finish.

Rose...
George!
By the heavens, I can hear them crying out from the pendants.
I've never seen a curse this powerful before... I... I don't know what to do.
Come on Olive! Rose was always there for you, even if it meant she got hurt so you'd be okay.
Well you're grown up now! Your turn to take the blow!
I thank you for all you've done for me, but whatever happens now you must not interfere.
There's one last ritual I can attempt, but it's forbidden.
Because... Because few can take the pain.
But even if I don't survive, Rose? Well... She'd do the same for me.

(Madame Olive adds the pendants and some materials into the transmutation box, and processes them at the apparent cost of her welfare. The souls rise from the box and unite before dissipating.)

I did it!
Wild Rose!
George!
They're together, at last. They're free from Rooke's curse.
I don't think they'll be returning anytime soon.
But they've found one another, thanks to you!
They're eternally grateful and so am I!
I'll make sure everyone in the Order knows what you did for two lost souls today.
If anyone can make it to the Shores of Gold, it's you!

She was following us again all day. I could see her sails on the horizon. Just out of reach of the cannons. COWARD.
I knew I wanted this life. Ever since I fell from my parents' sloop as a nipper and got saved by Captain Briggsy herself!
She looked me up and down and said I was going to be the sort of pirate who never let danger scare her away.
And thanks to her I never have. But they all say it's still too dangerous to take on Rooke.
I guess to keep George happy I will just keep writing my feelings down instead of wasting all our ammo. Ugh.
I wish things were simple again like they were back at Cannon Cove... 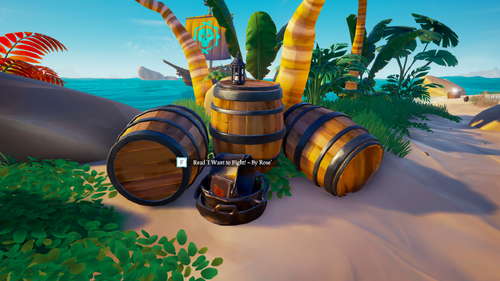 He'll Get Himself Killed!— By Rose[edit | edit source]

So we're at Cannon Cove and there's just gold sat there like a big dumb trap for idiots.
Guess who runs right up to it and gets jumped by an enemy crew lying in wait? YUP!
I had to fight all four of them myself. Lucky I had George's sword and mine also.
I was angry though so it was an easy fight. He never realised it was him I was mad at.
Let's see if we can make it to Lone Cove without me strangling him. I say it's 50–50. 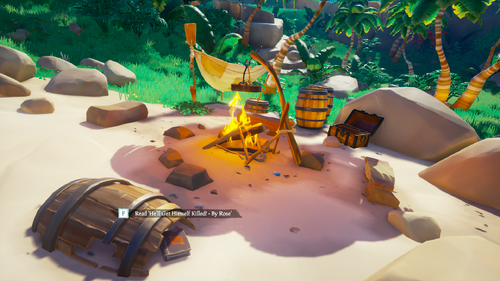 I Think I Love Her — By George[edit | edit source]

We have stopped to rest on our way to the Lagoon of Whispers, but the only whisper I can hear is echoes of the question.
Asked so plainly, the shock of it has completely dulled my senses, and I'm still no closer to the answer.
It's like that game where children pull petals off flowers one at a time.
She loves me, she loves me not. Although it's more like... I love her, I love her not, I love her...
I love her... I... Oh dear. 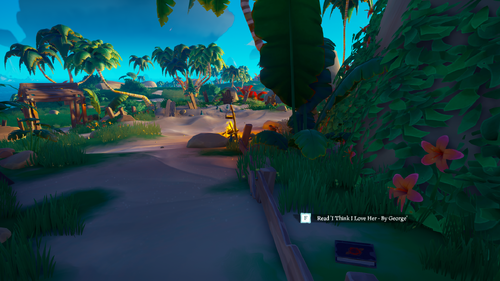 A Kiss and a Kiss — By George[edit | edit source]

Only the Captain's Cabin affords any measure of privacy on a galleon such as ours.
I knew that if I were to act, it would have to be while we returned aboard our rowboat.
I leaned closer. Rose tilted her head, quizzically. With my heart in my mouth, I moved nearer still...
My oar struck a sandbar just then. We touched! Or rather, collided. Rose's forehead; my (now rather bloody) nose.
I am dismayed, but not defeated. Once Quickshot is returned to the soil and we reach Sailor's Bounty, I shall try my luck again... 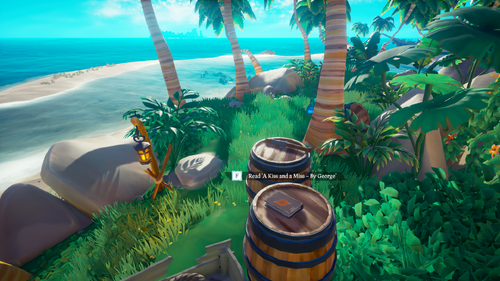 He Proposed! — By Rose[edit | edit source]

Today has been one of the best days of my life and one of the funniest too. My sides still hurt!
George had been thinking (too much) about how to propose to me. Where to take me and how to stand and what to say. Too bad he forgot to look where he was walking! He turned and said "Rose will you marry aaargh!"
He fell into a tree and got stuck upside-down swinging all day! Until we chopped it down anyway. Ha ha ha! Laughing again.
But of course I said yes anyway. As if I could refuse my George after all of that! 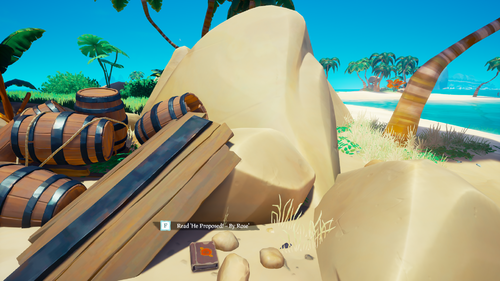