The Totem Keys (referred to as Totem in-game), refers to a Quest Item group of six different Totem figures that open six specific Totem Vaults as a part of various Tall Tales in The Shores of Gold (story arc).

These Totems can only be acquired as a part of either The Shroudbreaker (Quest), Stars of a Thief or The Art of the Trickster Tall Tale. These Totems are the size of Trinkets and can be carried in Container Chests. Each of these Totem Keys will unlock the respective Totem Vault. The Keyholes are square shaped carvings hidden among rocks with nearby respective Totem Cave Paintings.

Totem Keys are only useful for the Crew attempting the Tall Tale and cannot be sold to any Trading Company. Once the Totem Key is lost or sunk, the Tall Tale will fail.

There are 6 types of Totem Keys, which are used as keys to unlock the respective Totem Vaults on Large Islands:

Here is the Pirate Chat Wheel for every Totem: 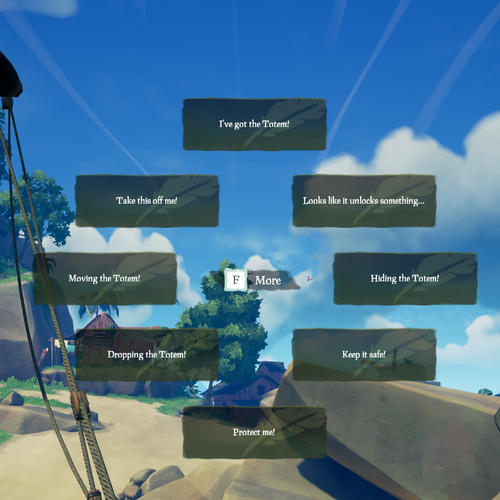