From Sea of Thieves Wiki
(Redirected from The Shrouded Ghost)
Jump to: navigation, search

They were first introduced as the main feature to The Hungering Deep Bilge Rat Adventure. Additional species were added in the Shrouded Spoils Update.

Megalodons are vicious predators that appear around Player Ships on open seas. A Megalodon encounter begins when the tense Megalodon music starts playing, after which, the Meg appears out of the deep sea behind the Ship and starts swimming closely until the Ship sails out of its hunting grounds or the Meg is defeated. Each Megalodon spawns with a unique personality, with ranging aggression, sometimes passive until provoked. 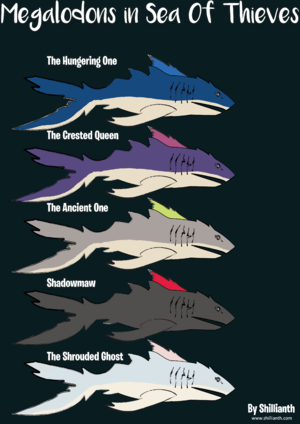