The Shroudbreaker is the first Tall Tale in the Shores of Gold Arc. The Tale Book can be voted for on the table next to the Mysterious Stranger in the Tavern of any Outpost. The Tall Tale can be voted to be cancelled at the Ship's Voyage Table. Players can unlock three Checkpoints during this Tall Tale. If they wish to continue the Tall Tale at a later time, they can vote on any acquired Checkpoints at the Voyage Table.

The details on the location of the Tale Book, related Commendations and unlockable Cosmetics are all presented in the Tall Tales Reputation Menu.

The reward for completing The Shroudbreaker Tall Tale is 8000

This Tall Tale must be first completed in order to access the second Tall Tale, The Cursed Rogue.

The Shroudbreaker Tall Tale takes players across The Ancient Isles to find what happened to the Pirate Lord's Ship Magpie’s Wing and whether it still has clues to the location of The legendary artefact Shroudbreaker. The Tall Tale starts and ends with the Mysterious Stranger at any Tavern.

For a full, step by step Walkthrough of the Tall Tale with Hints and Images, visit The Shroudbreaker Walkthrough Page! 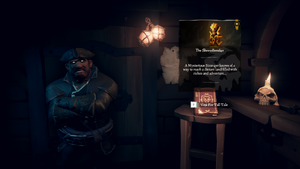 The Tale Book can be found and voted for in any Tavern.

Once the Crew has voted on the Tall Tale and listened to the Mysterious Stranger, they are given The Journal of the Pirate Lord Tale Book, which they can find and take out in the Map Radial Menu. Any Tale Book can be viewed with the Primary Use button (Left Mouse Button/Right Trigger). Once taking a closer look at the Tale Book, it's pages can be turned with the Q and E keys on a Keyboard and the Left and Right buttons on a Controller. As players progress the Tall Tale, they can pick up or receive additional pages in their Tale Books. These pages may be different depending on the types of puzzles that players encounter during the Tale - some puzzles have many variations, taking players to different locations for a more varied experience.

The following are the NPCs and Enemies encountered during The Shroudbreaker:

Click the button below to reveal the voiced dialogue in the Tall Tale:

One moment. You'd do well to heed my warning, for this is no ordinary voyage you're contemplating!
Few pirates have even heard of the Shores of Gold, let alone seen them with their own eyes.
They say it's an island riddled with untold riches, ancient secrets, hidden tombs, and deadly traps.
But you won't find it on any map, for it was swallowed up by the mists of the Devil's Shroud.
This book is the journal of the Pirate Lord himself.
It tells of his first ship, the Magpie's Wing and the journey he took to find the mythical Shroudbreaker-
The only way to part the fog and reach the Shores of Gold!
If you dare to follow in the footsteps of the greatest pirate who ever lived, then take the journal and use it to find the wreck of the Magpie's Wing.
It holds clues to the Shroudbreaker's whereabouts.
Bring it to me, and I'll set you on your way to the Shores of Gold.
But don't be fooled. Only the bravest, strongest pirates will be able to make it back alive…
I wish you luck. You're going to need it.
Heh heh heh...

Great Ramsey's Ghost! I heard all the stories, but to actually hold the Shroudbreaker in my hands… I never thought I would see the day.
Something's wrong...
There should be four jewels set in the base that grant the Shroudbreaker its power, but they've been removed.
Without them, you won't last five minutes in that fog.
Now let me think...I did hear tell that Captain Briggsy made it to the Shores of Gold.
If that's true, she might know the whereabouts of these missing stones. Not that she'd ever say.
Sometimes, even the best pirates fall victim to their greed or hatred, and it changes them.
Strips the flesh from their bones. Gives 'em power, but twisted 'em up inside. Briggsy is one such abomination.
People call them Skeleton Lords and most pirates flee at their approach.
Not even the Order of Souls dares challenge them, and rightfully so, but you… you are going to have to hunt one down.
I have eyes and ears across the Sea of Thieves, if you gather any of the missing pieces, I'll see they're restored to the Shroudbreaker on your behalf.
For now, head to Plunder Outpost and speak with Madame Olivia about Briggsy's whereabouts.
Remember, Skeleton Lords are NOT to be taken lightly.

There are several Quest Items present in each Tall Tale. These Items serve as elements of progression within the Tales and are of no value to anyone else aside the Crew doing the Tale. The following Quest Items can be acquired during the Shroudbreaker Tall Tale:

The Commendations of the Tall Tale reveal that there are five Mercia's Journals hidden away in the Tall Tale. These five Journals can only be found and read when the Tall Tale is active and they are only present for the Crew who is doing the Tall Tale. The Journals are hidden around The Ancient Isles Region retelling the accounts of Mercia (from the Novel Athena's Fortune) and her own search for the Shroudbreaker Artefact. Each of the Journals give hints of the next journal's location.

The locations and the contents of the five Journals are presented below. Click Expand under any Journal to see an image of its exact location.

What is the Devil's Shroud?[edit | edit source]

Finally, a balmy day, and a chance to document my research before it all spills out of my head and overboard.
Ramsey has been thinking again, and that usually means I'm the one due for a headache. He called for me late last night...
"Mercia. How might we stay safe in the Devil's Shroud?" I just stared at him. We all know how dangerous that fog is.
It surrounds the Sea of Thieves, but it ebbs and flows. Sometimes it swallows whole islands for months or even years at a time.
Sail into that mist, and you'll start to choke. The deck beneath your feet will splinter. The Shroud feasts on ships and sailors alike.
Being me of course, I told Ramsey I'd find a way. I've left my notes tucked away at Ancient Spire. I'll see what I can learn... 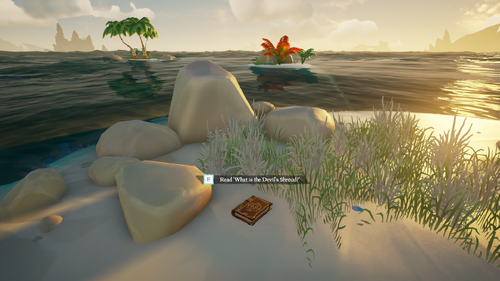 Found in a cave atop the Ancient Spire Outpost, this Journal mentions Devil's Ridge.

Did you ever walk into a room thinking about something so hard, you couldn't see it right in front of you? The truth is like that, sometimes.
While filling my tankard below deck, I happened to glance down at the map table. Ancient Spire. In the Ancient Isles. The truth...
I've asked to set course for Devil's Ridge, nearby. If I'm right, the key to breaching the Shroud has been in front of me all along.
We like to think of ourselves as being the first to find a way of reaching the Sea of Thieves, but that isn't the truth. Not one bit... 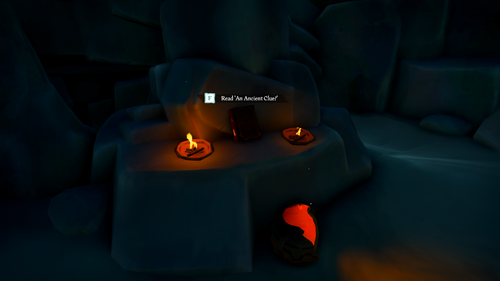 In a camp by the Northern Cannon on Devil's Ridge, this Journal mentions Thieves' Haven.

The First Ones. The Lost Tribes. The Ancients. Whatever you call them, they lived here, in what we now know as the Sea of Thieves.
Signs of their civilisation can be found all over the place, even on islands that were once claimed by the Devil's Shroud.
They built temples, altars -- places that were important to them. They couldn't simply pack up and leave when the fog drew in...
I'll need to cross-reference some of my oldest notes, stashed away back at Thieves' Haven. Our first hideout! How nostalgic. 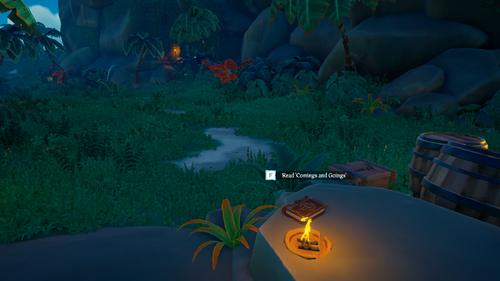 Inside an overgrown shack in the middle of Thieves' Haven, this Journal mentions Plunder Outpost.

It exists! Proof lies in some of the most obscure places (Ramsey won't let me write down where) but the relic's real enough.
As near as I can tell, they used the artefact like a beacon to protect their homes and places of worship from the Shroud's effects.
At other times, it was taken to a vault to recover its powers. When I told Ramsey, he replied "Ah, so it's a shroud breaker, then!"
All of this seems to have inspired him. We're making for Plunder Outpost on Ramsey's orders, to see a man about a map... 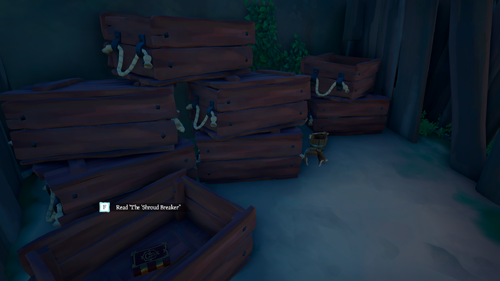 The Shores of Gold?[edit | edit source]

Placed by a Campfire on Plunder Outpost.

Well. This escalated quickly. Ramsey remembered the drunken ramblings of some old salt who'd sailed too close to the Devil's Shroud.
The old man claimed he'd glimpsed a glittering island... One where the very ground was made of gems and precious metals.
It sounds impossible, but as Ramsey likes to say, that's just another way of describing something we haven't seen yet.
At first light, we'll be setting out to find that Shroudbreaker. If these Shores of Gold are real, it's the only way we'll reach them.
I should get to my bunk and try for sleep. From now on, Ramsey's voyage journal can tell our story... 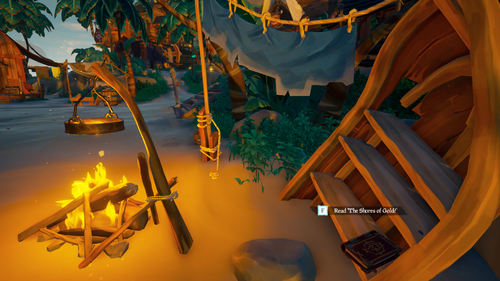 Any Player who completes a Tall Tale receives 8000

. This reward can be increased by Event reward multipliers and shared through Player Alliances.

The Shroudbreaker Commendations and Cosmetic Rewards are listed below: