The Quest for the Golden Bananas

The Quest for the Golden Bananas was a promotional ARG contest held by Rare & Microsoft from March 19th, 2018 to March 21st, 2018. There are a total of 15 clues/puzzles to be solved, each answer could be used to fill in the blanks on a template known as "The Passage", found on the promotion site (Now taken down). The fastest crew of each participating region to submit the completed Passage with all the correct answers were invited to take part in an Ultimate Test -- where one victorious crew would win the Golden Bananas!

When Captain Bronzebeard stole the Golden Bananas, he thought he had the perfect place to hang them; but he never reckoned the old Blind Bob might somehow swipe them for himself. When Bronzebeard discovered Bob was the thief, he clapped him in irons, and demanded the location of his treasure; but Blind Bob was never one to give a straight answer.

He met all Bronzebeard's questions with jumbled rhyming nonsense... or at least so it seemed.

In his rage, the Captain took another prisoner: Umbra, a member of the Scribes. A band of cartographers that know all the hidden corners of the Sea of Thieves. Bronzebeard locked her up next to Bob and gave her a choice: Decipher the mad ramblings or get chummy with the Sharks.

Then, one night as the ship was battered by a great storm, Umbra slipped out of her chains, stole a skiff, and escaped. When her tiny boat finally succumbed to the storm, she washed up on an island... The very island where Bob hid the Golden Bananas.

Now, if Umbra can remember all the riddles, find their true meaning, and get word to a savvy pirate crew - she's ready to cut a deal: her rescue in return for the Golden Bananas.

The five teams who were invited to participate in the Ultimate Test were:

The other four teams of National finalists received: 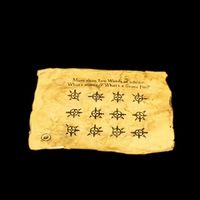 The Puzzle displays a series of ship wheels, each missing certain spokes.
The placement of the missing spokes correspond to Flag Semaphore and the associated alphabet. The corresponding letters will spell, "FIRST OUTPOST" 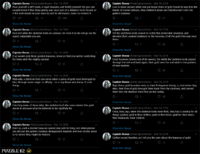 Umbra's Clue leads to the wisdom of Captain Bones and his "blue parrot", being @AskCaptainBones onTwitter.

The first letter of every post made on Mar 14, 2018 spelled out "PRINCELY GROG". 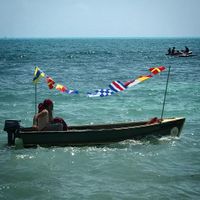 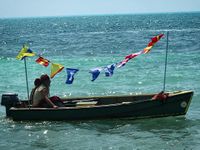 another view of Puzzle #3

Umbra's Clue:
"The real workd doth beckon
To this place ye may go
But a camera of webs there be
To keep all in the know


Umbra's Clue lead to a webcam stream displaying the Southernmost Point of Continental USA at Key West, Florida.
A boat adorned with the Golden Banana logo could be seen passing by several times. Raised up on poles of this boat were 10 colourful flags.

The boat's flags are Signal Flags which decode to spell, "DROP ANCHOR". 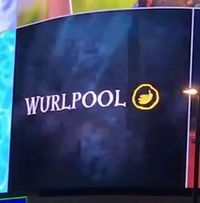 A video ad for Sea of Thieves would display the solution, "WURLPOOL". 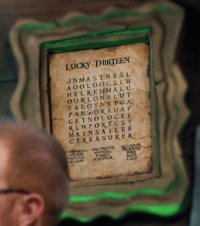 
At the 2 minute mark, a crossword, title "Lucky Thirteen", is displayed in the background.

Solving this crossword will leave certain letters unused, which will spell, "NO LEMONS ATOLL".

Hidden in the reflection of a boat are the words, "DON'T SHUDDER".

In the background, a billboard with a riddle is displayed. This riddle contains several geographical coordinates that, when viewed from above (using satellite view), resemble letters. These letters put together spell, "BEYOND SLITHER TAIL". 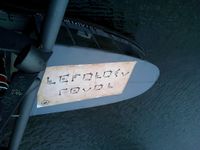 Umbra's Clue contains geographical coordinates that lead to a bridge in Berlin, Germany.

A boat with a tarp displaying a code passed by. The code is written in Pigpen Cipher Key; Once decoded, it spells, "LORELEYS INSEL" (Insel being German for Island)

Umbra's Clue leads to a video posted on Sea of Thieves Facebook page.

The riddle found within the video contains a list of 12 words. For each word, isolate the letters that represent Roman numerals, then match that number to the corresponding letter of the alphabet.

Umbra's Clue lead to Bondi Beach, a popular Australian beach where a sand sculpture of a Kraken and 8 bottled parchments could be found. One bottle contained a parchement with Puzzle #10, four skeleton keys.


Two keys with short sections, and two with longer sections of teeth. Aligning the teeth of both long toothed keys together will spell "SHIRK" (a mispelling of SHARK), while the short toothed keys spell, "FIN". Together, these words form the solution of, "SHIRK FIN".

Umbra's Clue leads to several Influencers who unboxed a gift package sent to them by Rare that contained a Grog recipe with symbols along the left and right edges of the page. Folding this page to align the symbols resulted a complete image of Puzzle #11.

Using the code cipher found on Umbra's Clue, the symbols from the Grog recipe can be decrypted to spell, "OLD DEUTSCHE BOAT".

Umbra's Clue contains geographical coordinates, a time, and a pass-phrase. The coordinates are to a cave entrance found at Parc des Buttes-Chaumont in Paris. Visiting the cave entrance at the time indicated by Umbra, visitors would find a pirate with a music who, upon hearing the pass-phrase, would reveal Puzzle #12.

The hint, "A minuit ça commence", suggests the key to solving this puzzle is to begin at midnight. Using the skull as a clock face, begin writing the alphabet around it clockwise, with A at midnight. Once done, the lines drawn over the skull will align with letters in the alphabet to spell, "UN TRIO DE ROCHES". 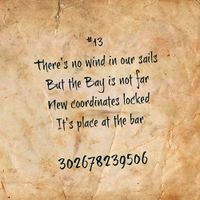 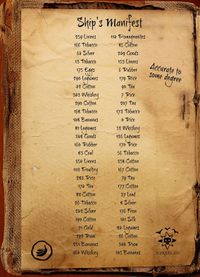 Umbra's Clue leads to an Ebay (E-lectronic Bay) account of "Chinless Cap'n Kevin". Players would then have to use a second Clue found on Instagram that provided the item listing number of "302678239506" to find the auction listing for Puzzle #13, titled "Chinless Cap'n Kevin's logbook", 2 pages from a Ship's Manifest.

"A priceless treasure.yours for a song. Who knows what secrets it contains.or what dark deeds lie within. Note: We are making no claims as to the authenticity of this logbook. Year: Unknown"

The hint of "Accurate to some degree" points to the count for each item to be a degreed angle. Using the large dot as a starting point, use the first listed degree to find a connecting dot, then proceed with the next degree from this new dot, and proceed to connect the dots. Once complete, the connected dots will read, "GLIDE THRU"

Umbra's Clue contains geographical coordinate, a time, and instructions to. The coordinates lead to Bastion Square in Victoria, BC where a pirate bard could be found playing concertina. Upon request, he would play Puzzle #14, "The Ballad of a Thousand Grogs".


The key to solving this puzzle is hinted at right away, "This is the ninth". The word "this" is the ninth word, "but you want the fourth one" which is "GHOST". Then take the "fifth to the last" word, in the lyrics and you get, "SHIPS". Putting these two words together you have the solution, "GHOST SHIPS". 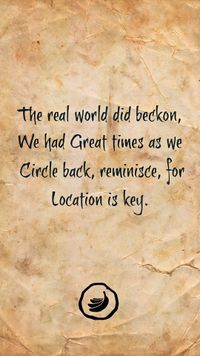 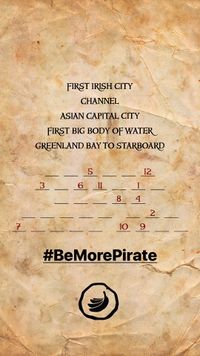 Umbra's Clue leads to the Official Xbox Instagram account where a series of posts provide Puzzle #15, consisting of a riddle, a list of words and phrases, and series of blanks spaces.

"Location is key" leads to location being the theme to Puzzle #15. There are five lines of words, and five lines of blanks spaces. Each line is a location, find the named locations that fit each description to find what is to be filled into the corresponding line of blank spaces. Ex. First Irish City is Dublin.

Once all the blanks are filled in, the letters within the numbered spaces will form a word. The number designates the order. The letters in the correct order will spell, "SEEING DOUBLE".