The Fate of the Morningstar

The Fate of the Morningstar is the seventh Tall Tale in the Shores of Gold arc. It is acquired from the Ferryman on the Ferry of the Damned. The tale is unlocked after completing The Legendary Storyteller, Stars of a Thief, Wild Rose and The Art of the Trickster.

The Walkthrough for this Tall Tale is incomplete. Until we provide the complete version, head on over to the Rarethief Walkthrough of this Tale. 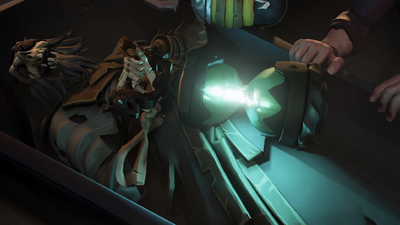 Vast is the chasm between the seas you sail and my domain. And yet, across the void, I have been watching you.

The young lovers you freed... Their souls are together now, at peace where I may not follow. And yet, others still linger beyond my reach.

The curse that binds them continues to spread like a plague, driven by the desires of a dark and twisted mind.

If it is not ended, calamity shall surely consume the Sea of Thieves.

In life, I was entrusted with a great treasure, one that lifts the veil which hides the spirit world from living eyes.

So precious was this artefact, it came with me to my grave.

I am naught by bones and dust, and now you too must sink into the dirt, and the worms, and the blood of a forgotten past. Steel your nerve...

Within this Book of the Dead, I chronicle those damned spirits who linger, trapped in the living world.

Use its writings to claim my treasure and put those lost souls to rest.

Now go! First, seek my sarcophagus, for my greatest treasure still lies within.

The Ferryman wrote about how he died on an island in The Wilds, entombed and buried at its highest peak. The Enchanted Lantern he held will illuminate visions of past demises and footprints connecting them, such as his time on the island. Head to the next island named in the Ferryman's book to recover the lost souls of the crew of the Morningstar.

Fragments of the Past[edit | edit source] 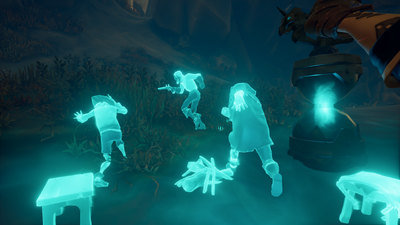 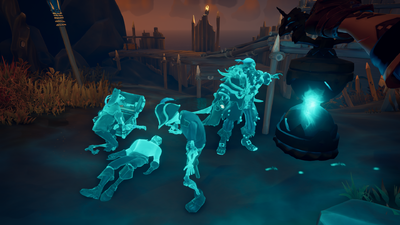 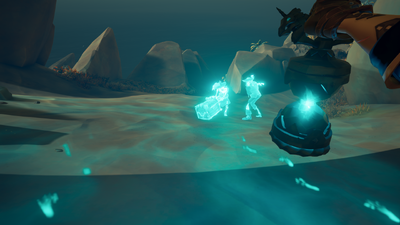 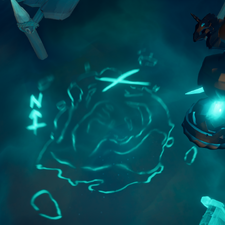 The map by Eli's corpse indicating the location of the chest behind a fence.

The skeleton lord Graymarrow pursued the Morningstar for their Shroudbreaker stone, binding the souls of the crew to buried chests to which the keys have been hidden away. The lantern will show moments of the event that are tracked by footprints that diverge across the island. Be vigilant for any changes to the paths, they may reappear after some distance in the last direction trekked.

Once each crew member was slain, the skeletons looted their soul into a chest and traveled across the island to hide the chest and key.

Return to the Ferryman once all the souls have been released from their chests.

You've returned my lantern and proven your mettle by freeing the spirits, but your fate is still tied to the Morningstar. Not only her crew, but to the vessel herself.
The evil behind these curses is a powerful Skeleton Lord named Graymarrow, who seeks to claim the Shores of Gold for himself.
He binds those who oppose him so that they may never return aboard my ferry and avenge themselves upon him.
To find this Graymarrow, speak with the shipwright at Dagger Tooth. She knows the whereabouts of the Morningstar, and hold secrets of her own...

I made it, Dad! I know you told me my ratty old sloop couldn't make it safely through the Wilds, but I'm here in one piece.
And that's good, I mean, this island is one of the most haunted places there is. They definitely don't need my ghost here, too.
I may not be much of a pirate, Dad, and you've never been afraid to say so. But tonight I'm going to finally do something right!
My hands are shaking so much I can hardly write, but I've got to do this. I'm GOING to do this.
Definitely not scared and definitely going to do this. Definitely. Right now. 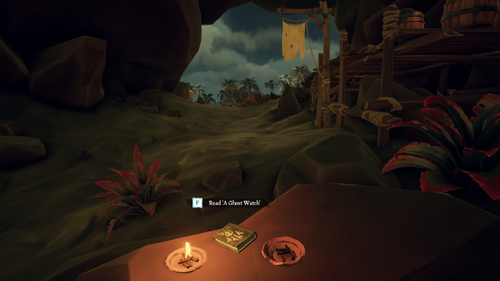 This is crazy. I've met a dozen pirates who claim this island is haunted. Were all of them just teasing me? Laughing at me?
I can't accept that. I HAVE to meet a ghost! Talk to it, maybe. Find out why they never came back aboard the Ferry of the Damned.
I have to know that there's more, Dad. I have to prove it.
I want to know, to make you believe, that someday we'll get to see Jill again. 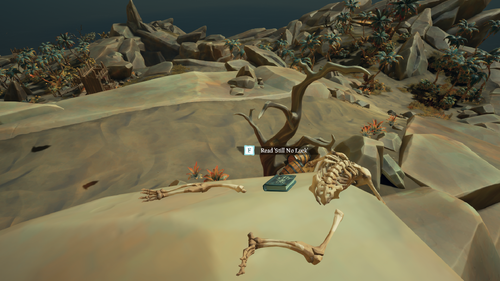 The fright of my life[edit | edit source]

The fog had already rolled in by the time I started hunting. You know how it muffles sound and makes everything strange?
Well of course you know, Dad... You know everything. Anyway, my mind started playing tricks on me pretty much straight away.
I got turned around, and started climbing, trying to get out the fog... Groping, blindly, hoping I didn't walk straight off a ledge.
That's when my hand touch it. Polished bone, cold as ice and moist from the fog. I thought I'd be seized by skellies for sure!
Lucky for me, the sun broke through just then. It was just a boring old kraken skull, not anything supernatural! Whew. 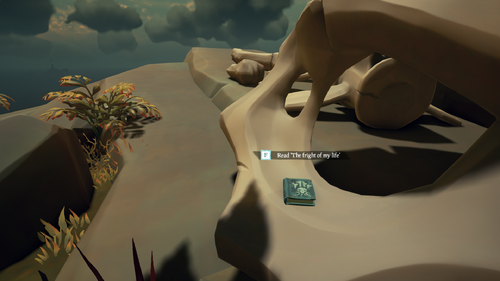 That kraken skull gave me an idea... I decided that if I were a ghost, I'd take notice pretty quickly if someone messed with my remains.
I went around the island, gathering up all of the skulls I could find and piling them up. I found some candles, too, which is good.
If I do meet an angry ghost, I certainly don't want to do it in the dark. Also, now I can see to write down more of my adventure.
Looks like a storm will be here by dawn. I miss the bed in my room, with all it's familiar creaks. But I made a promise to myself. So... 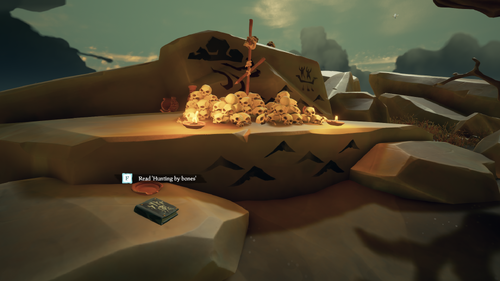 I tried every trick I could think of to stay awake, but I nodded off up on this bridge, amongst another group of skeletons.
I dreamed there was a man standing over me, stern and smart. He reminded me a bit of that old captain Jill used to idolise...
It was like he was trying to say something... and then KABOOM! Lightning strike. I woke up in SUCH a panic!
My foot got tangled in some ropes and I started screaming. I tugged as hard as I could... and all of the cages toppled off the bridge. Oops.
I'm done. Dawn is here and I didn't see one single ghost. I'll leave my books behind in case someone else has better luck.
I'm coming home now, Dad. Once again, I'm coming home and Jill isn't. Sorry. 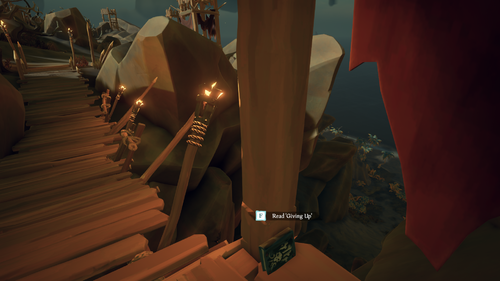