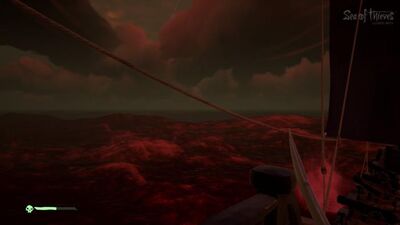 The Devil's Shroud, also better known by its community given name The Red Sea, is a shrouded boundary of the Sea of Thieves as an effective barrier for those who venture out.

Anyone who enter becomes disorientated and will end up lost within the fog, while it slowly corrodes all not-living organic matter and man-made materials that it touches. The environment also turns red and black clouds form. Ominous music occupies the experience whilst the ship buckles and breaks.

In-game, the shroud continuously damages the ship and respawns the player to a new ship if they manage to sail too far.

Currently, only one method can be used to dispel the Devil's Shroud: The Shroudbreaker.

In the Sea of Thieves Lore/Art Book and the Sea of Thieves Comic the Devil’s Shroud is described as an ominous grey fog bank surrounding the entirety of the Sea of Thieves. Anyone who may enter becomes disorientated and will end up lost within the fog, while the fog slowly corrodes all not-living organic matter and man-made materials that it touches. The Devil's Shroud acts as a foggy border between the outside world and the Sea Of Thieves.

It is known that the shroud itself ebbs and flows like a living being, swallowing up areas into it's corrosive and deadly fog and spitting out new areas. It is stated in Athena's Fortune that Tribute Peak was once the centre of the Wilds, from the current in-game map we can see that the shroud has swallowed up Tribute Peak and the majority of other land which once was a part of the Wilds.

The Shroudbreaker was used to effectively control the fog. It was once wielded by the Ancients, to protect their homes from its effects before being used by both Ramsey Singh and Grace Morrow whom used to unveil most of the regions and the The Devil's Roar.

It was also known that the Pirate Lord himself also wielded the power to divert the fog, as hinted in the Maiden Voyage when he clears and illuminates the path for the pirate to enter the region. A clue that he too has some form of access to the Ancients' power, even without the Shroud Breaker.

With it, he was likely the one to guide independent vessels through the shroud by a certain route, If a ship or a fleet was too large then it'd unable to travel through these routes without corroding and sinking due to the shroud's effects.

This size factor is one of the key reasons why the Grand Maritime Union are yet to invade and roam the Sea Of Thieves. The first pirates to cross the shroud mapped out the safest route for future pirates to venture into, attracting the Trading Companies who would form their own economy without fear from their enemies.