The Art of the Trickster

The Art of the Trickster is the sixth Tall Tale in the Shores of Gold arc. A disillusioned Trapmaker has been employed by Briggsy to protect a Shroudbreaker stone.

The tale can be acquired from Salty's camp.

Squawk! Polly got a bargain, Polly got a bargain!
Grade A traps for treasure and tombs, squawk! Fully guaranteed!
Squaa...oh, what's the use. No-one wants to buy from a talking parrot. Looks like it's back to the stale bird seed for me.
Truth be told, no-one's seen the Trapmaker in ages. I did find these notes she left behind, though.
Seems to me she was put to work designing traps for ol' Briggsy herself.
Looks like she left a trail to follow that leads all the way to Briggsy's stash.
Maybe you can use them to track it down, squawk. Just watch you step! The Trapmaker has a very... particular... sense of humor.
Um... And maybe come tell your old mate Salty if you find her, yeah?
Not that it's partly his fault she was kidnapped or anything, you understand, but... Squawk! Squawk! Bye for now!

The Trapmaker hid the tools required to find the key to her vault at a cave in Plunder Valley. The skeleton corpses must be re-positioned to match the riddle, which will activate the cage that will grant the Trapmaker's Spyglass and Notes to continue to the next island.

Deep it lies, near bird of stone, stories told in lifeless bone.
The forsaken Captain points to fire and ash...
Hand in hand, two lovers face their destiny...
The Rum Runner laid her drink to rest...
The thief hides behind her mask of gold...

The Trials of a Trickster[edit | edit source] 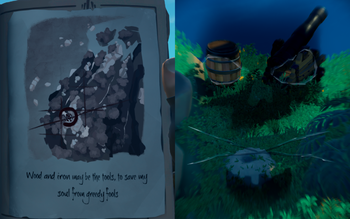 There are tons of ground markings on the island, but the provided map will specify the correct marking to stand on. The marking will point in the direction to use the Trapmaker's Spyglass, the overlay in the spyglass aligns the eyes with two objects in the environment to reveal the buried object indicated by the X. These objects can either be physical objects, and/or cave paintings. The final object buried is a Trapmaker's Key that will trigger an approaching wave of explosions that will destroy the key. Escape the island with the key and head to the Trickster's lair in Sailor's Bounty.

The Lair of a Trickster[edit | edit source]

The underground lair is defended by pressure plates and spikes, the way is indicated by the logo painted on the walls. At the end of the lair is a pedestal to fit the Trapmaker's key. Wave of skeletons will then spawn before a boss Captain of the Lair appears, who will drop the vault key and the notes directing to the vault.

The room sports a some wall levers that will trigger some spiked traps that have a wide area-of-effect, but these traps can also kill pirates that happen to stand in the area.

The vault will unlock immediately after lighting the table, but the door will shut and a wave of Skeletons will spawn. The boss drops the medallions to be inserted into the table, and pressing the solution key will spawn the next wave.

Submit the Shroudbreaker stone to Salty to finish.

Squawk! So you found the Trapmaker, eh? I never meant for her to come to any harm, I swaer it, but I had no choice!
Briggsy would have me for supper if I hadn't... introduced them!
And, AND I've been racked with guilt ever since she went missing! If I had feathers, they'd be moulting.
But now, you've inspired me to turn over a new leaf! I know I've been a bad egg, but it's time to mend my ways.
And to show my appreciation, I'll deliver that gem of yours for only five-- Er, I mean, for free!
Goodness of my heart and all that, 'cos we're mates now. Squawk!

Even while being forced to work against my will — and don't think I don't know which bird-brain is responsible — I still have my pride.
As the greatest Trapmaker the Sea of Thieves has ever seen, I must devise something brilliant to protect an equally brilliant treasure.
How, then, shall I prove the effectiveness of my creation? Why, by using a few greedy, grog-addled gold-diggers as guinea-pigs!
I shall begin my experiments upon Discovery Ridge. A few barrels packed with gewgaws should entice pirates into my game... 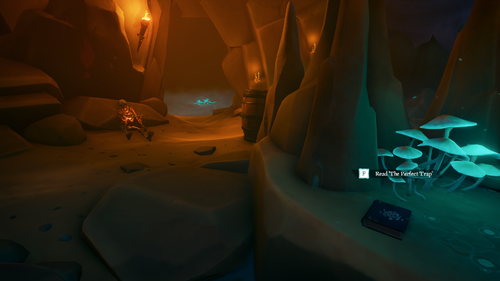 (Above the Ridge, Discovery Ridge)

My first test relied on the curiosity of the participant. First, I primed the location with some supplies that might attract a passer-by.
Next, a simple wooden lever was placed by the barrels. When utilised, it would strike a flint and so ignite a hidden powder-keg.
I had rather assumed natural whimsy would see the lever pulled once spotted, and tucked myself away to observe what came next.
The first pirate to arrive promptly wrenched my lever from its housing and absconded with it. "Nice hat stand", I heard him remark.
Subterfuge bests psychology when dealing with such avaricious crooks. I shall return to my workshop, and to the drawing board... 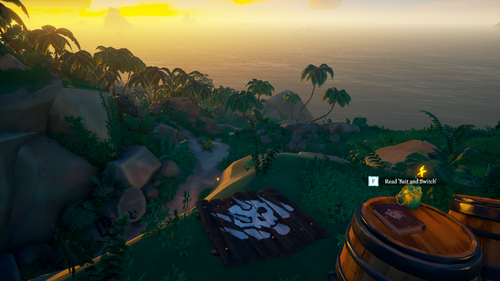 Recently, I've been testing different kinds of blades to see which are the most useful for 'deterring' intruders.
I've had some success with sword traps, as they look fearsome and have an excellent range. They're expensive to make, of course.
Saw traps use shorter, duller metal blades, and are definitely useful in confined spaces. Still, they lack a certain style...
Or should I go back to the tried-and-tested "wall o' stakes"? Though primitive, you can't argue with the classics. Decisions, decisions... 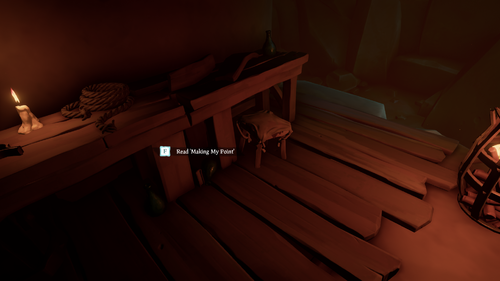 Some experimentation with weight and counterweights have allowed me to devise a new trigger, as well as protection for my workshop.
Even working with wood, for metal is precious and in short supply, I can use the weight of any intruder to spring a nearby trap.
As sensitive as these devices are, it is nearly impossible to disguise them entirely. Thus, they are best deployed in darker areas.
Unfortunately, I have been unable to completely muffle the noise made by the mechanism when someone blunders onto it.
A cunning criminal with sharp ears might, I suppose, get enough warning to save their own skin. Regardless, I am making progress... 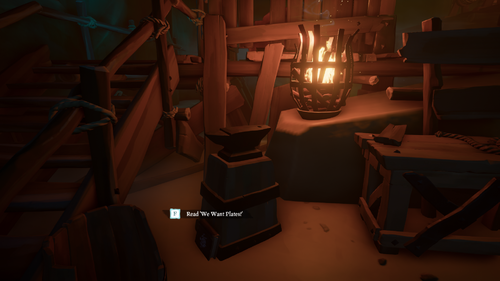 The more time I spend with Briggsy, the more I wonder if all pirates are ultimately fated to be consumed by their own greed.
Is the endless pursuit of gold and glitter, in and of itself, the greatest trap of all? As an experiment, I have decided to leave a trail that will lead to the very treasure I have been commanded to protect.
They'll be devious clues, of course. Ones that goad, deliberately mislead and test the mettle of those who read them.
One last game, then, winner takes all. Is there someone out there on the Sea of Thieves worthy of the stone? We shall see... 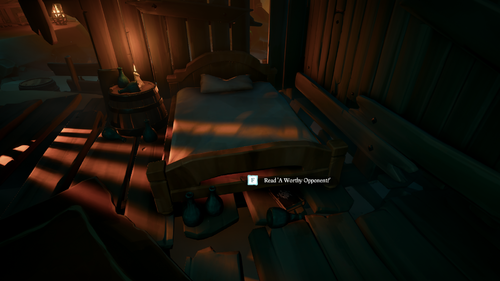