From Sea of Thieves Wiki
(Redirected from Tall Tale)
Jump to: navigation, search

Tall Tales are lengthy story Quests in Sea of Thieves that are accessed via Tale Books given by various NPCs who direct players towards grand adventures to uncover various secrets of The Sea of Thieves. 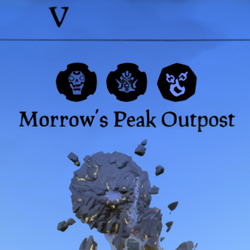 Tall Tales are lengthy, story driven Quests separate from other Quests and Voyages. Rather than voted on at the Voyage Table, they are found and voted on at their respective Tale Books found near specific NPCs that will give the crew the Tale's quest. The locations of Tale Books are marked on the Map Table with black icons that can be interacted with when zoomed into. Information on where to begin each specific Tall Tale is also noted on the "More Info" page when hovering over individual Tales in the Tall Tales Reputation Menu.

Once the Tale has been voted to begin, the NPC quest-giver will have a short introduction and all players will receive the Tale Book itself in their Map Radial Menu. Players can then view the Tale Book and turn its pages to read further, leading players to their next destinations through hints and puzzles.

An active Tall Tale will appear on the Voyage Table, where it can be cancelled with a vote. A crew can have one other Voyage active at the same time as the Tall Tale.

Most Tall Tales will adjust game balance based on crew size, choosing either smaller or larger islands for you and scaling Boss fights (currently, it is possible to bypass the Boss scaling by having all players but two leave the game and rejoin after the fight starts).

In addition to the Tale Books, players can acquire various Quest Items in the form of small or large Artefacts, Chests or Keys, which they need to deliver to certain places or use with certain things to progress the Tale. Likewise, Equippable Quest Items can be acquired during specific Tall Tales, which appear in their Map Radial Menu and have to be used to complete certain puzzles or sections of these Tales.

Tall Tales are considered complete if all the chapters have been completed. Players will receive a reward of 8000 Gold for the completion of each Tall Tale (which is also shared in Player Alliances).

Tall Tales are divided into Chapters which unlock a checkpoint for the Tall Tale, allowing players to exit and resume from this Chapter of the Tale at a later time. Players will have one saved checkpoint per Tall Tale. Starting a Tall Tale from a Checkpoint must be voted upon at the Voyage Table. Tall Tale Checkpoints can be discarded in the Quest Inventory.

These nine Tall Tales were released with the Anniversary Update, take players on a grand episodic adventure to piece together the mythical Shroudbreaker Artefact and enter the Devil's Shroud to find the legendary Shores of Gold.

An introductory Tale that starts right after a Player makes their Pirate.

These Tales cover the ongoing story arc detailing the return of Captain Flameheart. They are released individually via Content Updates and can be completed in any order.