Sudds' Ancient Spyglass is a special type of Spyglass Quest Item that shows players constellations in the sky. This Spyglass can only be acquired as part of specific Tall Tale and is equipped via the Map Radial Menu. The Spyglass is required to be used to solve the various Puzzles presented by this Tall Tale.

Player Crews acquire Sudds' Ancient Spyglass during Stars of a Thief Tall Tale. Unlike your regular Spyglass, this can only be equipped from the Map Radial Menu (E/

) during these specific Tall Tales. Stars of a Thief acts identically to the Player's spyglass, with the Primary Use button (

Here is the Pirate Chat Wheel for Sudds' Ancient Spyglass 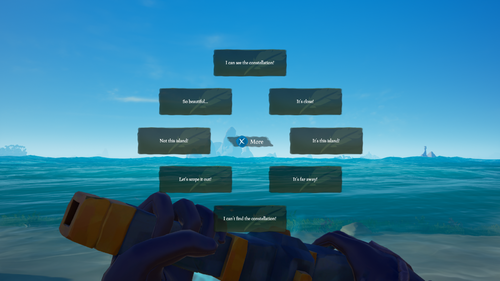