From Sea of Thieves Wiki
(Redirected from Stationary Items)
Jump to: navigation, search 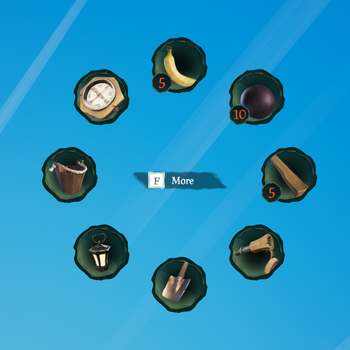 Opening the item menu brings up your current items.

The following page lists all types of Items available in Sea of Thieves.

The following are all the Items that the players have in their Arsenal and Inventory. Most of these items have various Cosmetic reskins.

These are the various articles of Clothing that the Player can wear. Additional customization variants can be bought at the General Clothing Shop. Clothing items can be equipped and switched at the Clothing Chest.

These are the various Vanity effects you can apply to your Player Pirate. Additional customization variants can be bought at the General Clothing Shop. Vanity items can be equipped and switched at the Vanity Chest.

These are all the Tools that every player has at hand to take on various challenges on the seas. Additional customization variants can be bought at the Equipment Shop. A player can change the look of any Equipment item at the Equipment Chest.

These are the various Instruments used to perform different shanties either alone or together. The first Instrument to start playing takes the lead role, with every other player supporting the Melody with backing chords or beats. The Lead can be given to another player when the first player stops playing. A player can change the look of any Instrument at the Equipment Chest.

These are all the Weapons available for the Player Pirate. A maximum of two Weapons can be carried at one time. Additional Customization Variants can be purchased at the Weaponsmith's Shop. Weapons can be switched out and (cosmetically) customized at the Armoury.

Although these item are tied to the Ship, every Crew is inherently tied to their Ship's location and as such, these Customization Variants can be counted as belonging to a Player's Inventory. New ship customization options can be purchased at the Shipwright Shop, where a player can also change the visual appearance of their Ship at the Ship Customization Chest. Flags can be put on and changed atop the Ship's Crow's Nest.

These are all the Supply items that the Players can carry with them or aboard their Ship. Additional resources can be found inside Barrels. Stock up on these to be prepared to face any dangers that accompany a Pirate's life.

These are all the various Objects that Player characters can Interact with in Sea of Thieves.

These are the various types of Items that can be hauled and carried around with you. Note that when carrying any of these Items, the Player cannot perform any other major actions. Most of these give off a coloured glint or gleam from afar.

These are the various Items that can be accessed via the Map Radial Menu.

There are various Currencies in use in the Sea of Thieves.