The Skull of Captain Randal Stone is found buried on one of the following Islands during The Seabound Soul Tall Tale: Cinder Islet, Scorched Pass, Forsaken Brink or Cursewater Shores.

The exact location of Randal's final resting place can be determined by the use of the Enchanted Lantern Quest Item, provided to a Crew during the Tall Tale. You will have to follow his footsteps to find where he was shot and killed. Once you have determined his death place, use your Shovel to dig up his cursed Skull.

The Skull has to be given to Sir Arthur Pendragon for a magic ritual that frees the soul of Captain Randal Stone. Pendragon will usually be found right by where the Skull was dug up on the Island. The Skull can be carried in Container Chests.

The Skull of Captain Randal Stone is only useful for the Crew attempting the Tall Tale and cannot be sold to any Trading Company. Once the Skull is lost or sunk, the Tall Tale will fail.

Long ago, Captain Randal stone attempted to ambush The Ashen Dragon and claim any of its Treasures and prisoners in a reluctant Alliance with Captain Martha Jane. Sadly, the Crew of The Ashen Dragon was far too experienced and deadly for the Galleon Crews. Once Captain Stone saw that the Ashen Dragon is far too powerful for the two of them, he turned tail and ran, leaving Captain Jane to her fate. None-the-less, as soon as The Ashen Dragon was done with Jane and her ship, they followed Stone to the shores of an Island and quickly shot him, eternally cursing his soul inside his Skull.

Here is the Pirate Chat Wheel for Randal Stone's Skull: 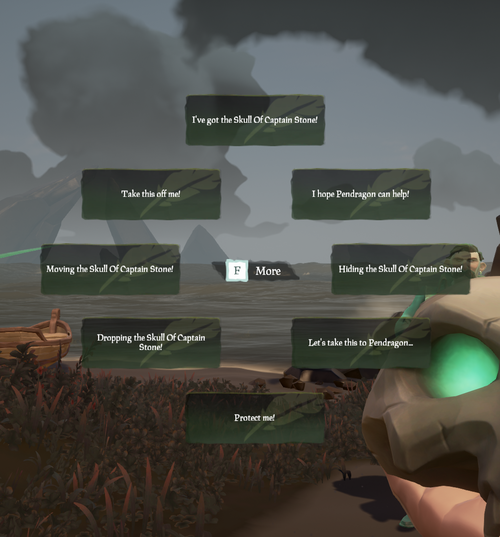