The Skull of Captain Martha Jane is found on the seafloor by one of the following Islands during The Seabound Soul Tall Tale: Shiver Retreat, Crooked Masts or Liar's Backbone.

The location of the skull can be either spotted by its white glint from afar, or determined by the use of the Enchanted Lantern Quest Item, provided to a Crew during the Tall Tale. The Skull has to be given to Sir Arthur Pendragon for a magic ritual that frees the soul of Captain Martha Jane. Pendragon will usually be found on the shores of the adjacent Island. The Skull can be carried in Container Chests.

The Skull of Captain Martha Jane is only useful for the Crew attempting the Tall Tale and cannot be sold to any Trading Company. Once the Skull is lost or sunk, the Tall Tale will fail.

Here is the Pirate Chat Wheel for Martha Jane's Skull: 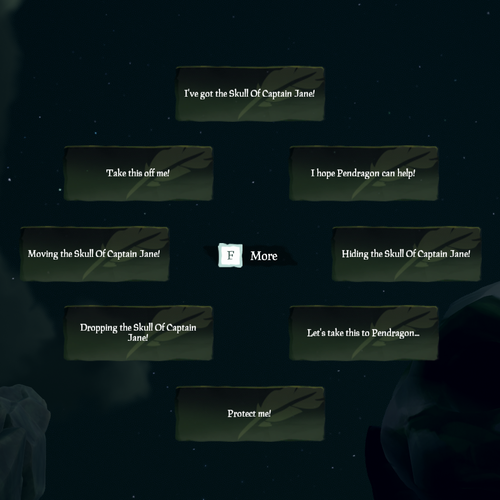