From Sea of Thieves Wiki
(Redirected from Skeleton Ships)
Jump to: navigation, search

A Skeleton Ship is a ship operated by a crew of skeletons in Sea of Thieves.

Skeleton Galleons and sloops can be spotted anywhere in the open world, distinguished by their blue and green lanterns and torn sails. Most skeleton ships out in the open are passive and sail from one island to next, however an aggressive Skeleton Galleon can rise from the sea by a player ship. An aggressive Skeleton Ship is signaled by the Skeleton Ship musical theme. These Ships are more likely to appear if you have Treasure on your ship or if you've been idle at a location for a long time and set sail. Passive Skeleton Galleons or Sloops become aggressive when a player hits them with cannons, gets too close to their ship or ladder or rams into them. Skeleton crews can be manned by any one type of skeletons, but never by a mix. Each skeleton ship uses a specific type of Cursed Cannonball. The Skeleton Crew can fix any holes in the hull with planks, but they cannot bail out water. A Skeleton Ship sinks when the water hits their upper deck. Skeleton ships can also sink themselves by ramming into islands or rocks. If a skeleton ship is stuck in an island for too long, it will despawn and leave its loot on the shore. Note that Skeleton Ships do not target rowboats, making it an excellent escape vessel. Be mindful that in order to get credit for Skeleton Ship commendations, your crew needs to hit the Skeleton ship with a cannonball at least once. Interestingly, skeleton ships are aggressive towards Megalodons, Krakens and Ghost Ships, and mostly get into fights with them when one or more of them are present.

The Skeleton Crews have 2 types of ships; a skeleton Galleon and skeleton Sloop, these are variants from the original Ships. 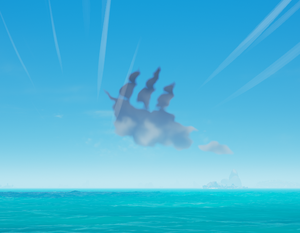 A Skeleton Fleet is a World Event that can appear only when another World Event isn't active. As with the Skeleton Forts, a Skeleton Fleet is signaled by a dark storm cloud shaped like a galleon. The cloud's size is tied to the proximity of the event, with the cloud getting bigger the closer a player gets. Skeleton Fleets spawn in the middle section of the map, close to Arches Peak and the Glorious Sea Dog Tavern and remain for a lengthy amount of time.

When a crew gets close to the cloud, the players are signaled with a title card and the skeleton ships arise from the sea. There are 3 waves, each wave contains two ships. Generally, the first wave spawns two Skeleton Sloops, the second at least one Skeleton Galleon and the third and final wave one Skeleton Galleon with a Skeleton Captain. The ship with the Skeleton Captain always drops 4 Skeleton Captain's Chests, 4 Skeleton Captain's Skulls, 3 Ritual Skulls and 3 Ashen Chests. When the ships sink, the players need to keep an eye on the general direction of the sinking locations as the ships can still move while sinking. As most of the Skeleton Fleets spawn around larger rock structures in the sea, it is possible that the ships can sail into the rocks and sink themselves, so the players need to keep an eye on their general locations if they don't want to miss the loot. The payoff of the entire event is generally between 15-30k.

For each ship, the skeleton and cannonball types are randomized. The crews can either be normal, plant, gold, or shadow skeletons. The ships can also use one of green and purple Cursed Cannonballs or Firebombs in the game. When a Skeleton Ship becomes aggressive toward a player ship, they will immediately start shooting their cannonballs and try to ram the player's ship for extra damage. When in close enough proximity, the skeleton crew will also attempt to shoot at the player with their guns.

Each skeleton ship has a captain, a cannon crew on the top deck, a repair crew below deck and snipers on the towers. Any skeletons that are killed on a ship, will re-spawn after a while. The cannon crew constantly uses one type of cursed cannonballs in addition to regular ones, making it harder for the player ship to move or repair their damage. For example, if a skeleton ship has Drowsy Cannonballs, the player characters may find themselves being constantly put to sleep and unable to fight back, escape or even repair, so it is of utmost importance to not stand still at a skeleton ship's cannon range. The repair crew will focus on patching up any holes, but they cannot bail out water so the most effective way of sinking a Skeleton Ship is to fill up their ship with water in one way or another.

Because of the vast amount of items in sea of thieves, there are many ways to sink skeleton ships, the most effective of which are listed below.

For this method, one generally wants to stockpile on cannonballs, planks and food. For this strategy, players simply want to get the skeleton ship in cannon range and keep up the firing pressure until the Skeleton Ship sinks. For this method it is best to have at least one player on cannon and steering duty and one player on repair duty. It is important to hit the cannonballs on the lower deck until they sink to the second deck. Aim for the upper decks when their cannoneers are causing trouble or when their water is already at second deck. Cursed Cannonballs also work on Skeleton Ships and crews so these are advised to use to keep the skeleton ship from maneuvering and repairing its hull. The Ballast and Peace Balls are extremely effective in sinking Skeleton Ships.

This method requires at least two people in the Crew. Have one person man the Cannons and shoot at least one bottom-deck hole, while the other person jumps on board the Skeleton Ship and goes down to guard the Hole from being Planked up by all the Skeletons. This requires a certain level of survival skills of the one guarding the holes, as they have to be able to take on waves of skeletons without dying. additional Food can be found on the Food Barrel on-deck.

One of the more effective ways to take down these ships. This method involves a member of the players crew taking a Gunpowder Barrel onto the other ship and detonating it. Be mindful that Skeleton Ships tend to speed away from any player that is approaching their ladders, so make sure you hit them with an Anchorball or get them stuck on a rock, island or other ships, so that the keg bearer has a guaranteed chance to board. You could also Harpoon the skeleton ship to get closer. After this is done, it is usually best to stay and distract the repair crew from patching the holes as a powder keg is not guaranteed to sink a Skeleton Ship. This can be mixed with cannons, as well as ramming the enemy ship for devastating combos. The best place to detonate the keg would be in the bottom deck, but the keg bearer has to watch out for the repair crew as they will immediately try to kill anyone who enters below deck.

If you have been lucky (or unlucky) enough to encounter a Chest of Sorrow on your travels and are bothered by a Skeleton Ship then you have a surefire way of sinking them. The Chest of Sorrow continuously fills up any ship with water when crying and as luck would have it, Skeleton Crews are incapable of bailing out water from a ship. Following the same advice as the Powder Keg Method, have one of your crewmates simply drop the chest anywhere on the Skeleton Ship and watch as they helplessly sink once the chest starts crying.

As of the Anniversary Update, this has become one of the easiest and most painless ways to sink any skeleton ship. The idea here is to sail behind a skeleton ship and have one of your crewmates harpoon the back-end of their ship and keep pulling it in. Meanwhile all the other members of the crew should fill their buckets with water and start bailing overboard towards the skeleton ship. This will fill up the skeleton ship in no time, causing them to sink without many supplies lost. This is best achieved when you have one small hole in your ship, so you can get a continuous source of water for sinking the skeleton ship.

The Bail method can also be done solo without a ship. You could simply swim or rowboat close to a passive skeleton ship (note that your own ship has to be far away for them not to aggro) and keep on throwing water on their deck.

During the Summer 2018 Cursed Sails event, banners were found on each outpost with a note from the skeleton ship crews.
Every week were 3 new crews with different Cursed Cannonballs. Each region had their own crew, and could be defeated between a specific in game time.