Rag & Bone Crates are a type of Bilge Rats Treasure in Sea of Thieves. These Crates are filled with bones recovered from inside Reaper's Boxes that are supposedly used for performing summoning rituals. These Crates have a delivery note to specific Seaposts, similar to Cargo Crates that are delivered for the Merchant Alliance. Instead of Gold, these Crates reward players with Bilge Rats Doubloons on delivery. Alternatively, the Crates can be delivered to The Servant of the Flame for Reaper's Bones Reputation an Doubloons (and Emissary Value when sailing as a Reaper's Bones Emissary).

There are in total 5 differently coloured Rag and Bone Crates, each having to be delivered to a specific Seapost.

Rag and Bone Crates can be found from the following sources:

Rag and Bone Crates can be sold to:

The following is the reward chart for sold Rag and Bone Crates (only applicable when selling to the Reaper's Bones): 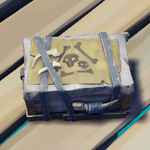 The White Rag and Bone Crate can have a delivery address to any of the 8 Seaposts in The Sea of Thieves. The White variant could previously only be picked up from designated Seaposts as a part of the Seapost to Seapost Voyage. 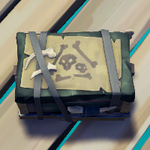 The Green Crate's delivery address is always Catherine at Three Paces East Seapost. The Green Rag & Bone Crate had a chance to be dug up on Shipwreck Bay as a part of Reaper’s Grave Voyages. 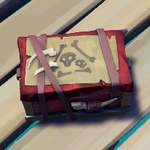 The Red Crate's delivery address is always Jonah at The Wild Treasures Store. The Red Rag & Bone Crate had a chance to be dug up on Shipwreck Bay as a part of Reaper’s Grave Voyages. 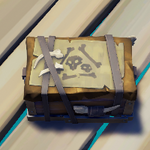 The Yellow Crate's delivery address is always Serik at The North Star Seapost. The Yellow Rag & Bone Crate had a chance to be dug up on Shipwreck Bay as a part of Reaper’s Grave Voyages. 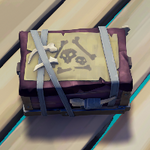 The Purple Crate's delivery address is always Stephen at Stephen's Spoils. The Purple Rag & Bone Crate had a chance to be dug up on Shipwreck Bay as a part of Reaper’s Grave Voyages.

The following Titles are related to delivering Rag & Bone Crates:

During the Smuggler’s Fortune Update in September 2019, Duke sent players on Mercenary Voyages to pick or dig up these Crates and deliver them to Seaposts around The Sea of Thieves for Doubloons or Gold. Once picked up or uncovered, each Rag & Bone Crate will needed to be delivered to the appointed Seapost address in 36 in-game hours.

Due to the high gold yield for late Crates, the game received a hotfix where the pricing of late Crate payouts was reduced from 1500 Gold to 250 Gold.

After the update, the Crates could only be found shored on Islands randomly, but due to a bug, they were most always late and rewarded Crews with just 250 Gold. Due to this, the delivery date and time were later removed from the Crates, also removing the gold reward of the item. With the February 2020 Crews of Rage (Content Update), the Skeleton's Orders Quests dropped by Skeleton Fort Lords started giving out Rag and Bone Crates.