The Pirate Appearance Potion is a Potion item purchasable from the Pirate Emporium for Ancient Coins in Sea of Thieves.

It allows players to choose a new appearance for their Player Pirate in the Infinite Pirate Generator. While Players can reset their Pirate by deleting the character from the Settings menu, all of their in-game progress will also be reset. The Pirate Appearance Potion is designed to allow Players to reset the character without losing any in-game progress such as Reputation levels, Currencies, Commendations, Titles or Cosmetics. 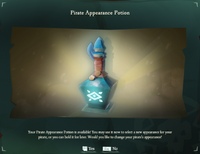 Once bought, the players will get a splash screen asking them if they want to reset their pirate each time after logging in to the game. Once selected, the Player will be directed to the Infinite Pirate Generator where they can start choosing a new Pirate.

This is Madame Olivia's Fresh Face Tincture - an enchanted potion that will change your face and body!

Speak to your helpful Pirate Emporium representative to buy this potion!
Once imbibed, your entire body and face will be changed by the magics within.
You will remain yourself in heart and mind, but your outward form will be as new.
Contains quicksilver, electrum powder and cursed tree bark. May cause soul hiccups. Do not use while operating a ship.