The Order of Souls Set consists of various Cosmetics themed around the Order of Souls Trading Company. These Cosmetics can only be acquired through dealings with the Company, mainly via progressing through Order of Souls Promotion Ranks. This Set Consists of visually upgradable Tankards and Lanterns, a Costume and a full Ship Set. There is also a 4-piece Emote Bundle available from the Pirate Emporium.

Note: Each Lantern or Tankard Skin upgraded through Company Reputation levels will replace the previous version, making it impossible to retain the looks of lesser versions if purchased. 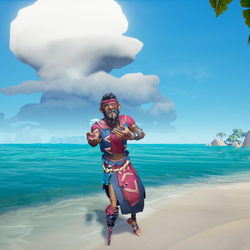 The Order of Souls Costume in game.