Karnath is a name given to two games, cards and dice, both of which are played by characters in the Sea of Thieves world. 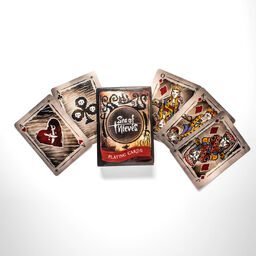 Karnath Kards is a card game that can be played with any regular deck of playing cards.

Its rules were included in boxes of Sea of Thieves Playing Cards.

How to Play[edit | edit source]

If the suits are different, the player adds the sum
of the pair to their score. (Picture cards are worth 15.)

The player can then choose to end their turn
and 'bank' their score, or to take another pair.

If the player turns over two cards of the same suit,
they lose all unbanked points and end their turn.

The winner is the first player to either clear an
entire deck in their turn, or to bank 500 points.

Karnath Dice is a dice game for two players, requiring one pair of dice.

How To Play[edit | edit source]

Once the game is underway, each player's goal is to be the first to reach an agreed total, usually 100 points for a quick round or 500 for a longer game. The player whose turn it is rolls their dice, and the result of their roll adds to their points (e.g.; a three and a six total nine points).

The player may choose to roll as often they'd like within their turn and keep scoring points. Alternatively, after each roll, they may choose to end that turn, in which case the points from that turn are safely added to their total.

If at any point, however, the player rolls a total of seven, they will lose all the points accrued during that turn, and their turn will end, passing to the other player. The player to reach the agreed total wins the game.

If a player rolls three doubles (two fours, say) in a row their points are doubled and their turn is over.