From Sea of Thieves Wiki
(Redirected from Gunpowder Barrels)
Jump to: navigation, search

A Gunpowder Barrel is a type of Explosive in Sea of Thieves that can be carried and detonated. Gunpowder Barrels can be commissioned by the Merchant Alliance as part of a Trade Good Commission, for which an increased reward is offered for the Barrels.

Gunpowder Barrels are found scattered all over the Seas or carried by Gunpowder Skeletons.

Primary Use of a barrel in hand will light a 6 second fuse to detonate, but can be cancelled by Secondary Use. The barrel can be picked up whilst the fuse is lit. The barrel will immediately detonate if shot by a player, struck, caught in an explosion, or upon contact with the outside of a ship hull. The explosion will damage all nearby pirates and Creatures (based on distance) within 9 paces of the detonating barrel, and put 4 holes into the hull of any nearby Ship as well as breaking nearby ship parts such as the Mast or the Wheel. Other barrels in the area will explode after 1 second.

Gunpowder Barrels can be sold to:

The following is the reward chart for the sold Barrel when not commissioned:

And the following is the reward chart for the sold Barrel when commissioned by the Merchant Alliance: 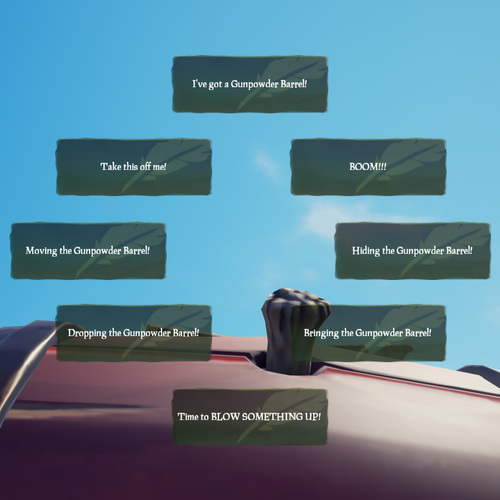