The Golden Wayfinder acts identically to the Player's Compass, with the Primary Use button (

) bringing the compass closer to view.

The Golden Wayfinder always points towards the general direction of a Torn Map Parchment. The further away the Player is from the location of a parchment, the broader the sway of the Compass needle. When a Player gets closer to the Parchment’s location, the needle’s sway will get narrower and narrower and start to move faster. Once the Player is above the location of the Parchment, the Compass needle will start to spin around in circles. Players will then have to dig above that spot with their Shovel to uncover a Map Parchment. Once a Parchment is dug up, picked up and used, one shard of a Torn Map will be revealed in their Quest Radial Menu and the Compass will start pointing towards the next Parchment piece. When all Parchments are found, the Voyage is considered complete and the Compass will disappear.

Here is the Pirate Chat Wheel for the Golden Wayfinder: 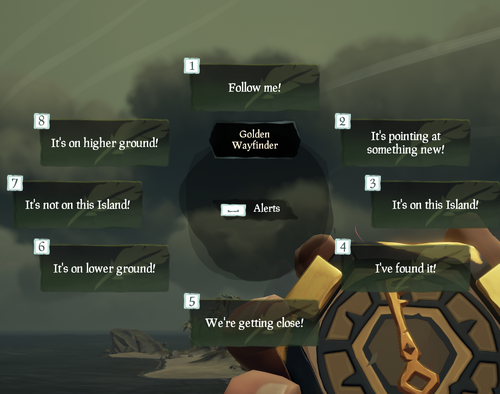