Ghost Ships are a type of Enemy in Sea of Thieves returned from the Sea of the Damned by Flameheart. These Ships usually appear in larger Fleets, headed by Ghost Captain Ships. Ghost Ships can be encountered during Ghost Ship Voyages or the Ghost Fleet World Event.

Where to Encounter[edit | edit source] 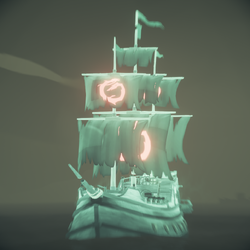 The Ashen Dragon makes an appearance during the Ghost Fleet.

Ghost Ships usually sail in groups and can currently appear as a part of two encounters: 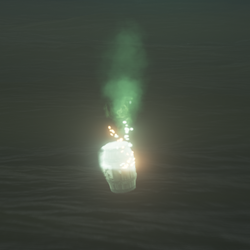 Ghost Ships leave behind Ghost Mines when in front of Player Ships.

Ghost Ships never appear alone, but rather in fleets, circling a single Large Island in group formations. These Ships don't stray from their trajectories and keep circling on, even if faced by obstacles like rocks or Ships. Ghost Ships will shoot Ghostly Cannonballs at any Ships that appear in their firing range and leave behind Explosive ghostly Mines when Ships are behind them. When a Ghost Ship sails through a Player Ship, it will leave behind several holes worth of damage in the Ship's Hull. Ghost Ships can be destroyed by any Cannon fired Projectiles. Sometimes, when Ghost Ships sail too far away, they will enter a portal back to the Sea of the Damned and sail out from one closer to Players. When a Ghost Ship is defeated, it will explode with a shockwave that will push back any Vessels in their vicinity.

There are five types of Ghost Ships: 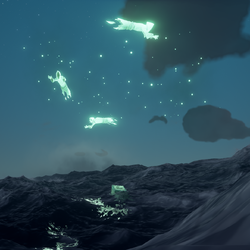 Any Treasure dropped by Ghost Ships will be circled with Wraiths.

Ghost Ships mainly drop Ghostly Treasure items that are marked by swirling phantoms after Ships have been defeated.