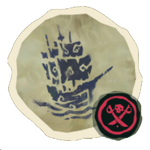 Ghost Ship Voyages are Voyages offered by the Order of Souls Trading Company in Sea of Thieves. These Voyages take Crews to a Large Island that has been overrun by Ghost Ships, where they need to take down a variable number of Grunt Ghost Ships to spawn the Ghost Captain Ship with its retinue. The Ghost Captain Ship is stronger than regular Grunt Ships and is guaranteed to drop Ghostly Bounty Skulls.

Ghost Ship Voyages can be purchased from the Order of Souls Representatives at any Outpost by anyone who has at least reached the Rank 25 Mystic Mercenary Promotion with the Order. If an eligible Player does not see any Ghost Ship Voyages in stock, then they might have to rely on a different Crewmate to buy the Voyage or wait for the Voyages to be restocked at 6am of the next day.

The Voyage needs to be put up on the Ship's Voyage Table and voted for before the Quest can be seen in the Quest Radial Menu.

Any Players can take part in a Ghost Ship Voyage if one has been put for a vote on the Voyage Table by another Crewmate.

Ghost Ship Voyages are always a single Chapter, one Quest Voyage, providing Crews with a Ghost Ship Map that send Players to find a Fleet of Ghost Ships circling a nearby Large Island. Ghost Ships follow a circular set trajectory around the Island and don't stray from it. When in cannon range, they will shoot any Ships with Ghostly Cannonballs. When they are in front of a Player Ship, they also leave behind Ghost Mines that explode after a set amount of time and deal equal damage to a Gunpowder Barrel. When Ghost Ships sail through a Player Ship, the Players will be unaffected, but their Ship will take several holes worth of damage.

The Voyages consist of two waves:

The first wave sees Players take on a variable number of Grunt Ghost Ships. These Ships are weak and take three direct hits of any Cannonballs to defeat. Once defeated, the ships will explode with the shockwave pushing any nearby vessels back. The number of Ships that Players have to shoot down in order to progress depends on the difficulty of the Voyage that is dependent on the Promotion of the person who bought and placed the Voyage down. Once enough Ships have been taken down, the rest of them will enter into portals back to the Sea of the Damned and the boss wave will begin.

The Boss Wave will see new portals open with a Ghost Captain Ship and up to two Ghost Flagships surrounded by Grunt Ships. The boss Ships are designated by their full Sails and Pennant Flags with the Captain Ship sailing the Ghost Captain Sails. These Ships are mechanically similar to Grunt Ghost Ships, but take considerably more hits to defeat. The number of Cannon hits required to defeat a Captain's Ship is dependent on the level or difficulty of the Voyage. It seems that the Flagships take around 10 Cannon hits to defeat. The Ships will start glowing with particles when low on health. Once a Skeleton Captain Ship has been disintegrated, the Voyage is considered complete.