The Ghost Fleet (also known as the Battle with The Burning Blade) is one of the World Events in Sea of Thieves Adventure Mode, indicated by the ghostly head of Flameheart in the skies. A Ghost Fleet can appear around any Large Island in the three main Regions of the Sea of Thieves. The Ghost Fleet rewards players with a handful of Ghostly Treasure as well as a Cannonball Crate of the Damned with Ghostly Cannonballs inside. 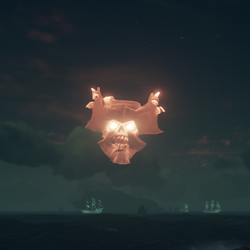 Flameheart's Head above an Island.

Ghost Fleets are one of the rotating World Events. A Ghost Fleet is indicated by Flameheart's ghostly head appearing above a Large Island in the skies. The chosen Island will be circled by a Fleet of Ghost Ships. Flameheart will start taunting Crews when they get close to the World Event. When a World Event is not present, the Kraken appears to attack a single Ship. If a Ghost Fleet is not present, Players will have to first complete the currently active World Event to have a chance for the Fleet to appear. If no World Event clouds are present, the Crew might have to sail into open waters to summon the Kraken before Events switch.

Ghost Fleets usually appear around a Large Island in the three main Regions.

Once Player Crews get close enough to the Large Island below Flameheart, he will start taunting them and a Title Card indicates the Burning Blade's presence. Flameheart has different taunts for different types of Players and Crews. The Ghost Fleet consists of four Waves.

The first wave sees Players take on Grunt Ghost Ships that circle the Island. They act like any Ghost Ships, sailing in a set trajectory, shooting nearby Ships with Ghostly Cannonballs and leaving behind Ghost Mines if ahead of any Ships. A Ghost Ship sailing through a Player Crew's Ship will deal significant damage to the Ship's Hull, but leave Players unharmed. Each Grunt Ghost Ship takes 3 hits of any type of Cannonball to dissipate in an explosion that knocks any vessels back. Some defeated Grunt Ships can leave behind ghostly Storage Crates of the Damned with Cannonballs and Wooden Planks in them. Any Ghostly Treasure is indicated by floating Wraiths. The first wave is over after 7 Grunt Ships have been defeated.

The third wave is identical to the first wave, requiring Players to take down 7 Grunt Ships again.

Once the three waves have been overcome, Flameheart's own ship, the Burning Blade will appear along with two Ashen Dragon Captain Ships. All the Captain Ships have Grunt Ships protecting their sides. The Ghost Fleet is considered complete when the Burning Blade is destroyed, however Players can also choose to take out the supporting Ashen Dragon Ships for more Treasure. Flameheart's Ship is the most visible of them all and takes a total of 24 Cannon hits to defeat.

The Burning Blade itself will drop around 15 pieces of regular Ghostly Treasure, 1 Captain Skull of the Damned and 1 Cannonball Crate of the Damned. This Cannonball Crate, while not valuable itself, is the only way to acquire Ghostly Cannonballs for your own use. The Wraith Cannonballs found inside are like miniature projectile Gunpowder Kegs that leave more than 1 hole of Hull damage and knock back the Ship on a hit.

The Ghostly Crates can be sold to the Merchant Alliance, the Skulls to the Order of Souls and the Chests to the Gold Hoarders, or they can all be sold to the Reaper's Bones instead.

Throughout the battle, Flameheart himself will be present, continuously taunting any Crews that get too close. Curiously, Flameheart also taunts any Skeleton Ships that enter or leave or sink in the area.

When a Ship Approaches the Fleet

A ship approaches... I see you, little vessel.
Before you lies the vanguard of my fleet...
Spectral vessels that I have summoned from the Sea of the Damned itself!
When my aramda is assembled, we shall burn our way across the Sea of Thieves...
...obliterating anyone who dares stand against us.
I suggest you turn back now and savour the time you have left.
Unless, that is, you wish to experience the true might...
...of Captain Flameheart!

My Keep at the Heart of Fire... My Ashen Lords...
...all are merely facets of a greater plan for this world!
Your self-righteous obstinance is proof enough that the Sea of Thieves is infested...
...with 'honour' and 'sacrifice'. DISEASED!
The fires I shall bring will purify the waves. I shall reign above an empire of flame!
And for my first decree... I ORDER YOUR ANNIHILATION!

Why have you chosen to stand against me?
Do you believe that you are more deserving than I?
Better-suited to impose your will upon the seas?
That you alone know 'how things should be'?
You know NOTHING! I have walked beyond the veil, and it gave me...
Vision...

When a Crew of Pirate Legends approaches the Fleet

• Ah, the Pirate Lord's puppets have arrived!
• It seems that Pirate Legends wish to challenge me!

• You think you're worthy of facing me?
• You sail only as long as I wish it!
• I expected more resistance.
• The waves are mine to command!
• I'm just getting started!
• You call this bravery? I call it stupidity!
• Was that it?
• Can you match my strength?
• Don't you realise you're outnumbered?
• All that you see is under my control!
• You would do well to avoid me!
• How much longer can you last out here?
• My galleons will overwhelm you!
• You're no match for me!
• Let's see you handle this!
• Is this your first time at the helm?
• You won't last forever!
• You dare defy me?!
• I'll show you no mercy!
• Tremble at the might of Flameheart!

At the start of the Boss wave

• This can't be happening!
• I'll finish this once and for all!
• It's time to end this!
• ENOUGH! Leave, now, or be destroyed!
• Your suffering shall know NO bounds!
• You will regret this insult!
• How? HOW can you still be alive?
• I refuse to be defeated by YOU!
• You've signed your own death sentence!
• Keep your distance, fool!
• I'll tear your world apart!
• So many ways I can kill you...
• I'll never surrender. NEVER!

When his Ghost Ships are defeated

• A new ship... Excellent!
• Another new arrival...
• My fleet grows stronger...
• I have whole fleets at my command!
• Come forth and fight for me!
• The might of my forces increases!
• The Sea of the Damned provides...
• If a ship falls, another shall take its place!

When his ships hit you

When a Ship leaves the area

When returning to the area

After defeating the Burning Blade

• Savour this while you can... Until we meet again!
• Noooo, my beautiful galleon!
• I choose to withdraw... FOR NOW!