Fort of the Damned (Raid)

An active Fort of the Damned is indicated by a massive red-eyed Skull Cloud appearing in the sky above the Fort.

The Fort of the Damned is covered in thick Fog at all times, one that is difficult to observe only from the outside. Unlike regular Skeleton Forts, the Fort of the Damned has no Cannons that can be manned. However, it shares the increased chance of spawning Gunpowder Barrels, making it easy to blow up any approaching Ships.

How to Activate[edit | edit source]

In order to activate the Fort of the Damned, players must perform a ritual requiring all six Flame of Fate and one Ritual Skull.

All six Flames of Fate must be collected from the Ferry of the Damned and used on a corresponding Ferryman statue found within the Fort.

The Ferryman Statues each have a motif representative of their deaths to mark what coloured Flames go where. To light a statue's lantern, raise your Lantern with Secondary Use and then Interact/Disengage. Once all the Statues have been lit, you are free to copy any of the flames from a lit lantern by raising your Lantern again and instead Secondary Interact the lantern.

After lighting all the statues, the cage with a headless Skeleton will open. Here, the Ritual requires a Ritual Skull to be placed onto the Skeleton's neck for commencement. There are various ways to acquire a Ritual Skull:

Once the Ritual is complete, the Fort of the Damned will become active, indicated by a massive red-eyed Skull Cloud above the fort fog. The Fortress Vault will seal and generate Treasure inside. Reaper’s Chests can be part of the Vault loot, which will also become visible on the Map Table.

The raid will spawn several waves of Shadow of Fate Skeletons and is finished with a boss fight with the Ghost of Graymarrow. 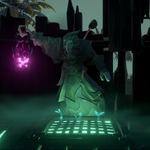 Ghostly hands will appear from the Grates below the Ferryman Statues to indicate which colour Shadows of Fate have spawned.

Shadows of Fate are uniquely coloured Shadow Skeletons that correspond to one Flame of Fate that is required to render them corporeal (Raising not required). To make it apparent for players to discern which coloured Skeletons spawn during a wave, ghostly hands will appear under the appropriate Ferryman Statues. These Skeletons can spawn unarmed, with a Cutlass, Pistol, Blunderbuss, Gunpowder Barrel or a Stronghold Gunpowder Barrel. A Shadow of Fate Skeleton has been recorded to endure about 8 Cutlass hits and one point-blank Blunderbuss shot.

Once the waves are cleared, the boss fight will commence. 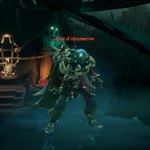 The Ghost of Graymarrow is identical to the Skeleton Lord Graymarrow with a ghostly effect.

The Ghost of Graymarrow will spawn as a Skeleton Lord fight. This Ghost is more powerful than Graymarrow, having significantly more health than in his corporeal form and has the same move set, however he notably has no teleportation ability and summons Shadows of Fate reinforcements instead of normal skeletons.

Ghost of Graymarrow always has the same amount of health, no matter the number of players attempting the Fort.

The suggested method to quickly lower the health of the Ghost of Graymarrow is to lure him to the bottom pier of the Fort and shoot him with Cannonballs from your Ship's Cannons. It still takes a considerable amount of Cannonballs (around a 100) to kill the boss, but it is faster and safer than using regular weaponry.

If positioned correctly, you can have one Crew member firing the Boss with the Harpoon which can deal 15 damage per shot while briefly stuning Graymarrow, making cannon shots easier.

Firebombs can also be used against Graymarrow, but they don't do too much damage. Setting the boss on fire is effective in making his location more noticeable for your crewmates. Especially good for those Cannoning, as the fire is easy to see through the Cannon smoke.

Anchor your Ship to avoid Graymarrow's shockwave pushing your Ship out of range. Shadows of Fate with Gunpowder Barrels can also be summoned right on the pier and cause damage to your Ship on explosion, if the Ship is too close

Green Cursed Cannonballs can affect both Greymarrow and Shadows of Fate, hindering their movement and weapon use.

The Red Skull Fort of the Damned Key dropped by Ghost of Graymarrow. 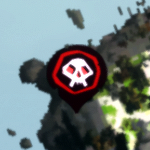 The Map Marker for the Key.

The Vault filled with high-value Treasure.

The Chest of Legends that spawns in the vault will count as stolen for Commendations if it is first picked up by a player from another Crew.

The following Commendations are related to the Fort of the Damned]]:

In total, there is one Title and 3 Cosmetic Items that can be unlocked by completing Fort of the Damned Commendations: