From Sea of Thieves Wiki
(Redirected from Fort)
Jump to: navigation, search

A Fortress is a type of fortified Island Location in The Sea of Thieves.

Every Fort Island is set up like a Motte and Bailey Castle with the main fortress built on top a hill with a heavily fortified courtyard below. The fortification structures surrounding the main Fortress itself are made of plain wood, however they are surrounded by spikes on shorelines and guard towers both built on the walls and inside the surrounding shorelines. Most of the in-land towers are fitted with Cannons and Ammo Chests. The sea-towers all contain 3 Cannons and a few Barrels. The main fortress structure has 3-4 floors and a Treasure Vault below it. 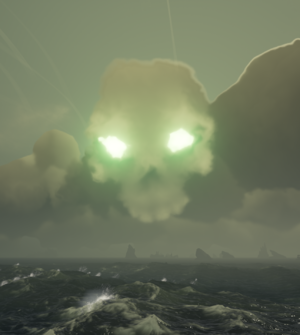 An ominous skull cloud appears over an active fortress waiting to be raided.

Every now and then, one Fort can become actively held by a crew of Skeletons who hide their Stronghold Treasure in the Fortress Vault. An active fort is indicated by a large thunder cloud in the shape of a Skull. During this event the fortifications become manned by Skeletons who will use every Cannon on the Island to sink any approaching Ships. Aside from this 10-15 waves of Skeletons will appear on the Fort itself, who have to be defeated to summon the Skeleton Captain who holds the Vault Key that opens the Vault that is filled with Stronghold Treasure. Within the cloud indicator above the fort, the eyes will appear as green, yellow, and red depending on the time of day and position of the sun.

Every main Region is home to 3 Skeleton Forts with The Devil's Roar only accommodating one.

The Fortresses and their Map coordinates are as follows: