From Sea of Thieves Wiki
(Redirected from Cursed cannonballs)
Jump to: navigation, search

Green Cursed Cannonballs can rarely be found from Barrels, Storage Crates or a Rowboat Chest.

The Green Cursed Cannonballs are as follows:

In-Game Description: "A cannonball that curses the enemy with drunkness, basically the pirate equivalent of friendship."

These Cannonballs apply the drunk effect on Players and Skeletons for a few seconds. This effect causes the player's vision to blur, their movements to sway left and right uncontrollably and of course, throwing up. The swaying makes fighting and maintaining a Ship quite difficult.

In-Game Description: "Gives the enemy an awful limp, which to be fair, is quite merciful for a cannonball."

These Cannonballs apply a limping effect on Players and Skeletons, similar to the one gained by falling down from great heights. It simply makes a player move very slow, not too bad as far as Cursed Cannonball effects go.

In-Game Description: "This cursed cannonball sends your foes to sleep, so you can pirate unimpeded."

These Cannonballs make Players and Skeletons perform the Sleep Emote for a few seconds, blocking them from performing any actions. This is one of the more dangerous cannonballs to get hit by when trying to repair the ship as it allows holes to let through a couple of second's worth of water. It also debilitates the whole crew on board.

In-Game Description: "A cannonball that makes people dance! A huge hit at parties AND sea battles."

Like Wearyball, these Cannonballs make Players and Skeletons perform the Dance Emote for a few seconds, also blocking them from performing any actions. Just as dangerous as Wearyballs.

In-Game Description: "This cursed ammunition will inflict an insidious poison on your foes."

These Cursed Cannonballs have the same effect as being bitten by a Snake, causing the Poisoned effect. The screen will turn dark purple and health will start degenerating by 5% every second for a few seconds. This is fairly harmless when you have full health. Dying to this Cannonball also allows the player to receive the Purple light for the Lantern at the Ferry of the Damned. They are also the only ones capable of dealing damage, albeit indirectly.

There are 6 different Purple Cursed Cannonballs. These Cannonballs apply different hindering curses on player Ships and Skeleton Ships. Purple Cursed Cannonballs do not deal regular damage, therefore being useless against Creatures. Additionally, they do not damage the Hull of a ship, just curse the targeted aspect of a ship. Cannons loaded with one emit a purple smoke from the barrel while the balls themselves give off a faint illumination when held.

Purple Cursed Cannonballs can rarely be found from Barrels, Storage Crates or a Rowboat Chest.

On impact, the cursed aspect of the ship will be covered in purple smoke to notify the crew of an active curse. Purple Cursed Cannonballs are as follows:

In-Game Description: "This cursed cannonball will raise or lower the enemy anchor, great for putting a stop to pursuits."

As noted in its description, when a Ship is hit with an Anchorball, its Anchor will drop on impact. The Capstan will be covered by purple smoke, but can be immediately raised after being dropped once.

In-Game Description: "A cannonball that stops enemies from firing back! If you want peace, prepare for war..."

Upon impact with a Ship, a Peaceball will curse all the ship's Cannons by raising them to the highest position within purple smoke, stopping the ship from effectively firing back until the cannons are readjusted.

In-Game Description: "Curse the enemy's wheel, so they can't do any of that pesky maneuvering nonsense."

Upon impact with a Ship, a Helmball will curse the ship's Wheel, making it impossible to turn it for a few seconds and forcing the Ship to move in a single direction.

In-Game Description: "Slow the enemy down with a ball that becalms their ship."

Upon impact, a Riggingball will curse the Ship's Sails, completely raising each one amidst purple smoke. This will promptly slow a ship down to its lowest speed until the sails are lowered again. This Cursed Cannonball is effective when used after anchoring an enemy player's ship, making sure that they won't be sailing off as soon as their anchor is once again raised. This Cannonball is less effective on Skeleton Ships as their sails get lowered automatically.

In-Game Description: "Give them a surprise, take away their supplies!"

Despite the description, a Barrelball does not remove a Ship's supplies upon impact. It will Curse the Supply Barrels in purple smoke, but this only prevents players from accessing the Barrels until the curse effect ends. This Ball is less effective against Player Ships if players already have their inventories stocked with Supplies, however these balls are very effective against Skeleton Ships, as it prevents the Skeletons on board from acquiring Planks to patch up any holes on the ship. Hitting a Skeleton Ship with a Barrelball before and after a barrage of Cannon fire effectively sinks a Skeleton Ship in seconds. 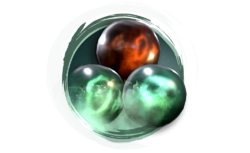 There are 3 different Ghostly Cursed Cannonballs that shoot out screaming Wraiths or Phantoms from Cannons. These Cannonballs are only found inside Cannonball Crates of the Damned that are received as a reward for completing Ghost Fleet World Events.

Ghostly Cannonballs are as follows:

In-Game Description: "A tormented spirit from a spectral realm. It strikes like a cannonball."

The Phantomball is essentially a reskin of the regular Cannonball that shoot green Phantoms from Cannons instead.

In-Game Description: "A fiery spirit that engulfs its target in a burst of red-hot flames."

In-Game Description: "A wrathful spirit that leaves several holes and rocks any ship it hits."

Wraithballs are more powerful than regular Cannonballs, effectively acting like small Gunpowder Barrels when they hit any Ships. A hit Wraithball does splash damage to the Ship, leaving several holes in the Hull and rocking the ship like a Blunderbomb at the same time.