The Ashen Winds (also known as the Ashen Lords) is one of the World Events in Sea of Thieves Adventure Mode, indicated by the Ashen Winds Cloud, a fiery-red tornado marking the site of a summoning ritual performed by Ashen Skeletons lead by Flameheart. After the ritual is complete, one of the four Ashen Skeleton Lords will be summoned to take on crews. These rituals are generally performed on Large Islands in one of the three main regions of the Sea of Thieves. When defeated, the Ashen Lords leave behind a wealth of Devil's Roar Treasure and an Ashen Winds Skull that can either be used as a Flamethrower type weapon or sold to the Order of Souls (or Reaper's Bones) for Gold and Reputation (and Emissary Value when sold as Trading Company Emissaries). 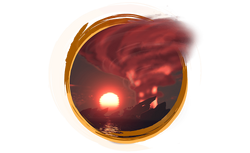 The Ashen Winds Encounter is one of the rotating World Events in Sea of Thieves. The appearance of the event is indicated by the Ashen Winds Cloud in the skies above a Large Island. Players will hear ominous music when approaching the island. On the island, Players will find a handful of Ashen Skeletons performing a Summoning Ritual. Once approached, the ritual will be complete and one of the four Ashen Lords will rise to take on any player crews.

The Ashen Winds Cloud above the summoning ritual.

When player crews get close enough to the summoning ritual on the marked island, an Ashen Lord will rise. The Ashen Lords are mechanically very similar to Skeleton Lord fights from Tall Tales or Forts, but have a different fire related set of moves. There are four different Ashen Lords that Players can encounter as a part of the Event. The main difference between the lords is their dialogue and appearance, with all of them sharing the same health pool and moveset.

Ashen Lord Battles can be categorised into three phases. The phase switches are signified by the Lords kneeling down from weakness to gather strength. During these moments of weakness, the Lords are immobile and cannot attack, allowing Players to get easy hits in. The second phase begins when the Lord is at ~75% health and the third phase at ~50%.

The Lords will become more aggressive and powerful with each phase, gaining access to new moves. In the second phase, the Lords gain access to their powerful Shockwave attack. The final phase is the longest phase, during which the Lords unleash their true power by gaining an attack that effectively summons a Volcano eruption over the island. The Lords also seem to get chattier with each phase.

Tests suggest that Ashen Lords have 8000 Health: 2000 Health in first phase, 3000 Health in second phase and 3000 in the third phase. The phase switches, where the Ashen Lords kneel down in weakness require players to do roughly 400-600 damage to progress to the next phase. Note that the Lord will progress to the next phase on their own after half a minute and the damage dealt during the phase switches does not add up to their total health pool.

The following section lists all the Large Islands that can host the Ashen Winds World Event. All of these locations match the spawn areas of the Skeleton Lords Briggsy and Graymarrow from the Tall Tales.

Not only do the Ashen Lords have access to any moves of Skeleton Lords (aside from Teleportation), they also have various other fire related moves at their disposal:

Once the Ashen Lord has been defeated, they leave behind a guaranteed Ashen Winds Skull, Chest of Rage, Ritual Skull, and approximately 15 Devil's Roar Treasure items will be raised by Geysers in the general area. These 15 Treasure Items can be the following:

Player Crews can encounter 4 different Ashen Lords during this fight. They all share the same attacks and health pool. The only difference between them is their dialogue and appearance. These Lords are each held a special position in Flameheart's army.