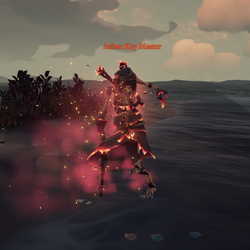 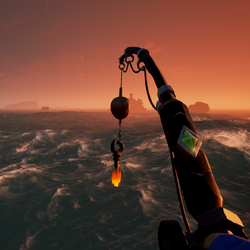 Ashen Keys have a chance to be caught with a Fishing Rod.

An Ashen Key is a type of Key in Sea of Thieves that is used to unlock Ashen Chests to gain access to the valuable Treasure and rewards inside such as Ashen Tomes, Ritual Skulls, Gold, or Doubloons. Ashen Keys are also a type of Bilge Rats Treasure that can be sold to the Bilge Rats for 5 Doubloons. Alternatively, they can be sold to the Reaper's Bones for Doubloons and Reputation instead.

The Ashen Key is not useful on its own, unless the Crew finds an Ashen Chest. A single Ashen Key can be used up to unlock an Ashen Chest, after which, the Chest will reveal three Treasure items. A used Ashen Key cannot be recovered, but the unlocked Ashen Chest can be sold for an equal amount of Doubloons once opened and emptied.

Ashen Chests can be found from various sources, most commonly found as a reward for solving an Ashen Guardian's Notes Quest that is dropped by Ashen Guardians that appear during Skeleton Fort World Events or on Islands as Emergent Skeleton Captain spawns.

Tip: If in need of an Ashen Key, find either an Emergent Skeleton Captain or Ashen Guardian on an Island and attempt a soft-reset of the Island by having the whole crew die or exit the Island's Title Card range. A soft-reset has a chance to change the Captain/Guardian to a different type, or cause it to despawn (in which case, a soft-reset can be attempted again).

Ashen Keys can be sold both to:

The following is the reward chart for sold Ashen Keys (only applicable when selling to the Reaper's Bones):

Here is the Pirate Chat Wheel for the Ashen Key: 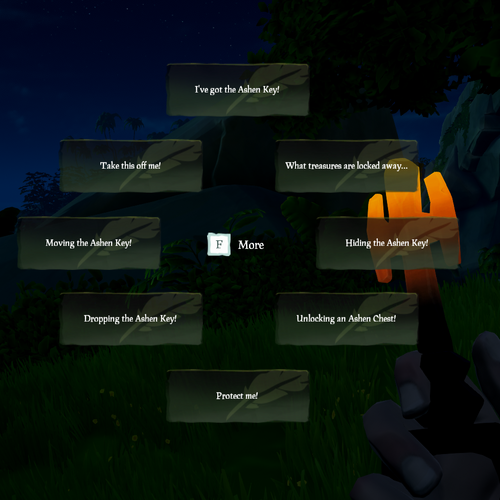