The Ancient Skull is a Quest Item for The Seabound Soul Tall Tale. The mysterious Skull was cursed to eternally lock away the soul of a mighty Captain.

The Ancient Skull is found as a part of The Seabound Soul after gaining access to the Tomb Cave at Flintlock Peninsula.

The Enchanted Lantern will reveal ghostly Skeletons dragging the Captain's Sarcophagus from the shore to the cave.

After opening the Sarcophagus, Players will retrieve the Skull from the skeleton found inside and deliver it to Sir Arthur Pendragon for a magic ritual. Pendragon will be outside the cave, ready to perform the ritual after you have dealt with Captain Adara and a few skeletons.

The Ancient Skull is only useful for the Crew attempting the Tall Tale and cannot be sold to any Trading Company. Once the Skull is lost or sunk, the Tall Tale will fail.

The Skull belongs to none other than Captain Flameheart who was betrayed by his own kind and eternally locked away in the Skull. The Ashen Dragon was the funeral pyre of Flameheart sending him to eternal rest in a Tomb Cave on Flintlock Peninsula in The Devil's Roar. Unknowingly, Sir Arthur Pendragon and the player are tricked into finding and undoing the curse of Flameheart as a part of The Seabound Soul Tall Tale, releasing his soul once again.

Here is the Pirate Chat Wheel for the Ancient Skull: 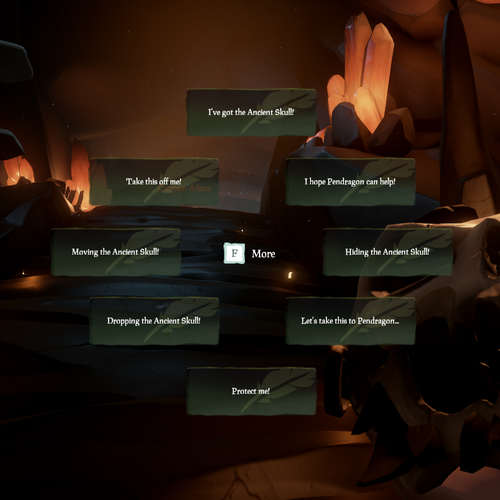