Version 1.0.8 of Sea of Thieves was released May 23, 2018. It brings much-requested features like the ability to discard voyages and set your aim sensitivity, and the first of many updates to improve accessibility for our colour blind pirates! [1]

In case you were adrift, lost at sea and missed it, we released our official trailer for The Hungering Deep and our very first issue of the Pirate Times! What hides in The Hungering Deep? Find out on May 29th when this free content update arrives! For now, keep your eyes out for that grizzled old soul Merrick on the shores. He's seen... things." 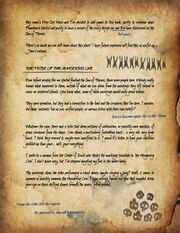