Version 1.0.6 of Sea of Thieves was released May 1, 2018. It contains new cosmetics and regular performance improvements and bug fixes. [1]

We read your feedback in the Customisation Mega Threads and in other parts of the community about the limited variety of available options to dress and customise your pirate. This weeks patch delivers the first wave of cosmetics into shops in the form of expanded sets for Admiral, Bilge Rat, Sea Dog and Sovereign.

Alongside the new cosmetics variations, you'll find that shop stock varies from outpost to outpost, depending on the region you’re in. Don't worry, you can pick up your new Bilge Rat gear in all regions, but you'll have to head to the Ancient Isles to pick up the new Sovereign set!"

This should resolve confusion around players seemingly being invulnerable at outposts. 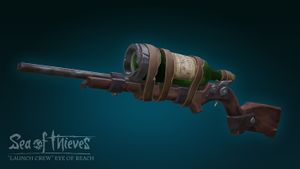