"It's been just over three weeks since we launched Sea of Thieves, and a lot has happened since then! We've been listening to you all, and we know you are keen to hear how we plan to grow Sea of Thieves. As we've always said, launch is just the start, and we are going to grow and evolve the game with feedback from our community. It feels like the right time to reveal how we'll do this.

Our first content update, The Hungering Deep, will release in May and bring with it a new AI threat to the world. Watch our Inside Story and read our Content Plan Article to get you all caught up on what is coming next in Sea of Thieves!"

The game was unavailable due to necessary maintenance during these times:

We are working on a way for our Customer Support team to reset your pirate to your original selection. If you have experienced this bug, please ensure you have logged a Support Ticket for this issue.

This bug has been fixed and will be added to a future update. 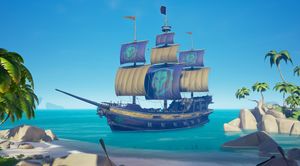